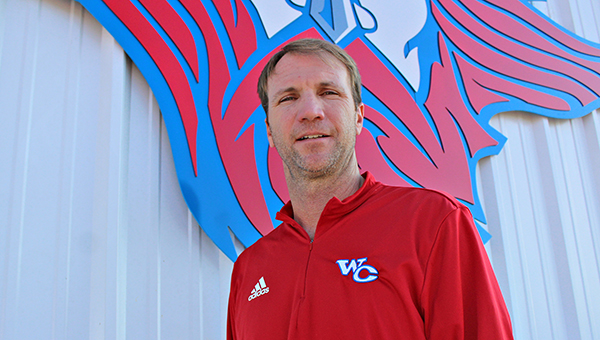 Warren Central's Josh Morgan is the 2021 Vicksburg Post football Coach of the Year. It's the sixth time in seven seasons that he has won the award. (Ernest Bowker/The Vicksburg Post)

At the midway point of the 2021 season, Warren Central was not a very good football team.

Sure, the Vikings had a 3-3 record, but two of the three wins included a bit of good fortune and were by a total of four points. In the three losses, they were soundly defeated. The normally stout defense was missing tackles and the offense seemed stuck in neutral.

They were 0-3 in region play and the season was hanging by a thread. When they showed up for practice on Monday, Oct. 11, head coach Josh Morgan recalled, it was time for some brutal honesty and hard decisions.

“As a coaching staff, we felt like for us to have a chance, there were a couple of things that couldn’t be negotiable. We had to stay together. That was imperative to us, to keep the morale up and the guys up and keep us going in the right direction,” Morgan said. “And then the next thing was, they had to be coachable. We weren’t playing very well and they had to get better. We had to check our feelings at the door, myself included, and call everything what it was. We had to move forward. We were able to do those two things.”

That week, the Vikings gutted out a 3-0 victory over Pearl that was not secured until Brandon Gilliam kicked a field goal on the final play. The next, they routed Terry 31-0, and the week after that was a 42-13 romp over Petal.

From the depths of their darkest hour, the Vikings rallied to rip off a five-game winning streak and reach the second round of the MHSAA Class 6A playoffs.

The end result and final record of 8-4 was what has come to be expected from Warren Central, but navigating the path to get there was as difficult as it gets. For walking the high wire without falling off, and for turning a sinking season into a winning one, Morgan has been selected as the 2021 Vicksburg Post football Coach of the Year.

“So much character was built during this season. So much understanding one another, and how to pick a teammate up, and knowing how to come together and unite. All the good stuff that makes sports what it is, I feel like we experienced that this year,” Morgan said. “Sometimes you can’t enjoy the sunshine unless you’ve been through the rain. The wins became sweeter and the bond became tighter. I really hated to see the season end, because watching what was unfolding was truly special.”

Morgan couldn’t hide a smile as he talked about his 2021 team and its journey. In early October, however, he seemed like a beaten man.

The Vikings won their first three games, but their flaws were quickly exposed during a three-game losing streak to Oak Grove, Brandon and Northwest Rankin. A defense that allowed a total of 30 points in the three wins gave up 38, 38 and 30 in the three losses.

The losing streak put the Vikings in a position where they needed to run the table to extend the program’s playoff streak to 10 years. Morgan said his players leaned into that tradition in the run-up to the showdown with Pearl on Oct. 15.

“From a tradition standpoint, our players knew and felt that. They weren’t going to go out like that. They just weren’t going to have it,” Morgan said. “I really saw our tradition step in around the middle of the year. I don’t think I’ve ever seen it, in such a light, where they knew they had no margin for error because we had backed ourselves into a corner.”

The Vikings took the first step toward salvaging their season that Friday night. Pearl had been averaging 37 points per game, but Warren Central shut them out for the first time in three years. Junior quarterback Jack Wright made his second start of the season — he had also started the previous week against Brandon and played all but one series vs. Oak Grove — and led a gritty drive in the last two minutes to set up Gilliam’s 33-yard field goal as time expired.

“That fight we had that night … how many 3-0 games do you see where it’s just guts on the field?” Morgan said. “It was heart. That’s what our program is built off of — finding ways to win, great teamwork, being tougher than the other guy, wanting it more, and spirit and desire. That’s what Warren Central is built off of.”

Over the following month, the Vikings did it again and again. The offense got back on track, the defense returned to form — it allowed 11 points per game and pitched two shutouts during the five-game winning streak — and special teams contributed a string of big plays. Gilliam had at least one field goal in five of the last six games, Jae Mims blocked a half-dozen kicks, and Jaylon Trisby had several long kick returns in key situations

Morgan said some schematic tweaks were made that made the Vikings more dangerous. Defensively, for example, they got away from their tradition 4-3 look to put different players on the field. A beneficial side effect was a rotation of sets that gave opponents trouble.

More than anything, however, Morgan said it was simply a team coming together on the mental and emotional side of the game.

“Schematic stuff, a lot of times, is overrated. We did make some tweaks. The biggest thing for us was a gut check,” Morgan said. “It was really a mentality switch, and putting team first in everything that we did and understanding that we’re all going to have to get on the same page to be successful.”

The Vikings’ late-season surge crested with a 30-21 road victory at D’Iberville in the first round of the Class 6A playoffs. It ended the following week with a loss at Brandon that didn’t seem to sting as much as some previous postseason setbacks.

The road they’d traveled to get there, pushing all of the right buttons along the way, led to satisfaction at a job well done rather than bitter disappointment.

“We talk about the foundation and the culture. Once that’s in place, it’s hard to shake it. It allows you to be sustainable. It allows you to take blows and overcome the shakiness. That’s a credit to our program. When the boat started rocking, everybody didn’t jump off,” Morgan said.

As he put the 2021 season to bed, Morgan also said he was proud of what he and his staff have accomplished over the long haul. Since going 3-19 in his first two seasons, Morgan has won 65 percent of his games at Warren Central and led the program to 10 consecutive playoff appearances. In Class 6A, only South Panola (19) has a longer active streak.
Morgan has an 81-61 overall record, which also puts him fifth all-time among Warren County coaches.

And this latest bit of success, he said, is the kind that can pay dividends for years to come.

“When you get to see something like that, and how that was handled, you like to duplicate the moments that breed success. It’s a really good experience that our juniors and sophomores and freshmen were left with,” Morgan said. “It’s a good way to handle adversity and stick together, and handle tough times. It’s easy to be a part of something when everything is great. But sometimes it’s a snowball headed downhill and you’ve got to stop it and turn it. That’s really hard. That’s a great experience for our guys.”