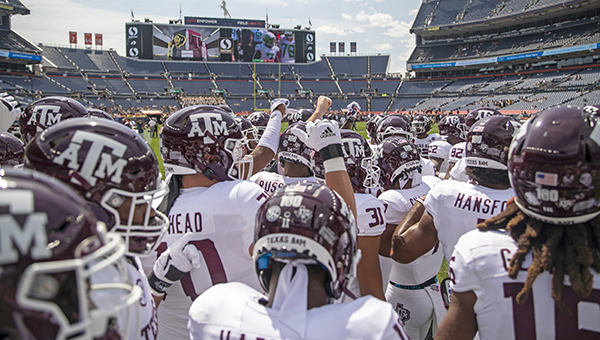 Texas A&M players huddle during a game earlier this season. The university announced on Wednesday that it will not play in the Gator Bowl on Dec. 31 because of a COVID-19 outbreak within its program. (Hayley Pennesi/Texas A&M Athletics)

COLLEGE STATION, Texas (AP) — No. 23 Texas A&M won’t play in the TaxSlayer Gator Bowl against No. 20 Wake Forest on Dec. 31 because of COVID-19 issues and season-ending injuries, the team announced Wednesday.

“It is unfortunate, but we just don’t have enough scholarship players available to field a team,” Texas A&M coach Jimbo Fisher said in a news release.

The Aggies (8-4) were scheduled to leave for Jacksonville on Sunday. The team did not provide any details on the COVID-19 issues or injuries on the team.

“It is heartbreaking for our players, coaches, staff and fans that we are not able to play in the TaxSlayer Gator Bowl,” athletic director Ross Bjork said. “Postseason football is the pinnacle of the season and when the opportunity is lost, it hurts on many levels.

“As we have learned in the last 21 months of this health challenge, the well-being and safety of our student-athletes is paramount,” he continued. “Our players poured their heart and soul into this season and we appreciate their dedication as Aggies. Aggie football is on track for long-term success and we know that the best is yet to come.”

Wake Forest (10-3) is holding out hope of finding another team to play in the Gator Bowl to cap a 10-win season that included winning an Atlantic Coast Conference division title.

Athletic director John Currie said Wednesday that he was “heartened” that at least five teams had reached out to express potential interest in playing, including one team that has already played in a bowl game.

Coach Dave Clawson met with the team captains earlier Wednesday for them to decide whether they wanted to play. The answer was yes, but with a “qualifier” that they didn’t want to work out and practice through the holidays if the game was unlikely to come together.

“I think for our players, in fairness to them, if we’re going to keep them over the Christmas holiday, we probably need to know something fairly early Friday,” Clawson said. “We wanted to give it enough time so there was an opportunity to find an opponent. But again, our players — and you can understand this — if they’re not going to be playing in a bowl game, they wanted to be able to spend the holidays with their families.”