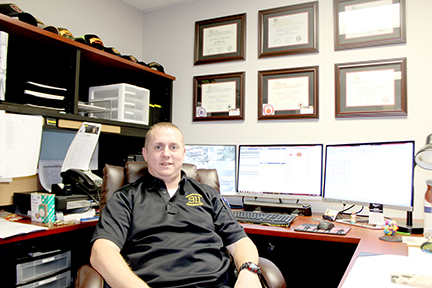 Vicksburg-Warren 911 Director Shane Garrard has submitted his resignation after 10 years with the department.

Garrard spent five of his 10 years with Vicksburg-Warren 911 as the department’s director and said he will be leaving his post for a new opportunity in the federal arena. However, he said he will miss working with the 911 staff and members of the Warren County 911 Commission.

“I found a better opportunity with the federal government, with the U.S. Army Corps of Engineers,” Garrard said. “In my departure email to my staff, I told them I want them to keep striving to be the frontrunners of 911 in Mississippi.”

Garrard said overall, his time with 911 has been great.

“You have your ups and downs, but for the most part, it’s been really good,” he said. “The (seven-member) 911 Commission has been good to me and the community is great. Warren County is a great place to serve.”

Jerry Briggs, County Fire Coordinator and member of the 911 Commission, said the members are happy for Garrard as he departs for his new job. Briggs also said he will be serving as interim director of Vicksburg-Warren 911 at least through the first of the year.

“As a commission, we’re very happy for Shane,” Briggs said. “As far as my statement, I’m looking forward to working with his staff that Shane’s put in place. Sometime after Jan. 1, the commission will decide if they’ll hire someone or if I will serve in a dual role.

“All I want to do is make what Shane started even better.”