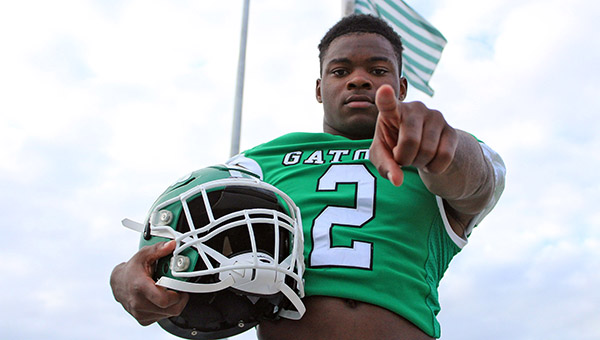 For 32 days in September and October, Vicksburg High’s football team did not allow a point. It was the program’s longest such streak in 48 years, and one of many milestones it achieved in a remarkable season.

And, at the center of it all, was Demarion Robinson.

The senior linebacker led the Gators in tackles. He ran down running backs and covered receivers, forced fumbles and provided valuable leadership on a defense that got better by the day.

Now, at season’s end. Robinson stands tall as The Vicksburg Post’s 2021 Defensive Player of the Year.

“It was just me playing for my brothers. The 22 that was on offense and defense, those are my brothers and I’ve got to step up for them,” Robinson said. “I don’t play for myself. I play for everybody around me and the people in the stands.”

Robinson moved to Vicksburg from Port Gibson in 2020 and had a solid season with VHS, with 44 tackles and five sacks. He stepped into a bigger role this year and took to it immediately.

Robinson finished the season with 125 tackles, four sacks, and 13 tackles for loss. He forced six fumbles and intercepted a pass, with his speed and aggression allowing him to thrive whether he was stuffing the run, rushing the passer or dropping back into coverage.

“He’s probably the fastest kid on the team, no doubt,” McDaniel said. “He understands his fundamentals and his reads at linebacker. After that, you just let him go and let him be a natural leader on the field. Obviously we loved to blitz him a lot because he was so fast and good at timing up snap counts.”

The Gators started the season with back-to-back losses, but Robinson said those also planted the seeds for success. They held their own against Germantown running back Branson Robinson, who signed with Georgia last week, and then allowed only a single touchdown on the opening drive in a 7-6 loss to Warren Central.

The next time they allowed a point was just over a month later. Four games and most of a fifth, 19 quarters in all, elasped without an opponent putting a point on the board. It was Vicksburg’s longest such streak since the 1973 team posted five consecutive shutouts.

“That pushed us more. After that first one we said, ‘We can continue to do this.’ We ended up doing something that hasn’t been done in a long time in Vicksburg,” Robinson said. “When we played Germantown and they had Branson Robinson, the No. 1 running back in the state, once we saw how competitive we were toward him that let us know we shouldn’t turn down for anybody.”

The month of shutouts spurred the Gators to a 7-5 record and a couple of other things they hadn’t done in a long time. They hosted a playoff game and won one, both for the first time since 2008, before running into perennial juggernaut West Point in the second round of the Class 5A playoffs.

Robinson had never played for a winning team before this year, so finally being part of one added yet another layer of icing to an already tasty cake.

“It was more, I had to do it. I came from a losing background at Port Gibson. Not to talk down on them, but my 10th grade year we went (1-10) and last year (at Vicksburg) we went, like, 2-10. This year we finally turned it around,” Robinson said.

Robinson was selected to the Mississippi Association of Coaches Class 5A All-State first team, and is preparing to play at the next level. He has offers from Copiah-Lincoln and Mississippi Delta community colleges, and has received interest from several others. He plans to make his final decision after New Year’s and sign in February.

McDaniel said that whoever lands Robinson will be getting a gem.

“He’s a true football player. I’m trying to figure out what is taking so long for these colleges to offer him, because I don’t see any other linebacker in the state with his type of speed or aggression,” McDaniel said. “He can go to college and play strong safety or free safety, he can play Sam linebacker or Will linebacker. Whatever they want, he has that type of versatility.”

No matter where his future path takes him, Robinson said he was glad it brought him to Vicksburg.

“I love it up here in Vicksburg,” he said. “I’m proud to be a Gator. I wasn’t a Gator at first, and they have accepted me into their family. I’ll forever be a Gator and try my best to make everybody happy here when I come back.”