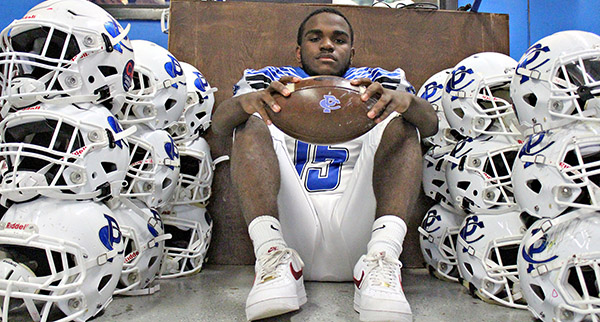 Porter's Chapel Academy running back Tyler Washington is the 2021 Vicksburg Post football Offensive Player of the Year. Washington rushed for 1,346 yards and 21 touchdowns this season to lead PCA to its first winning season since 2008. (Ernest Bowker/The Vicksburg Post)

A few weeks into his senior season, Tyler Washington was not a happy camper.

The reason for the senior running back’s discontent was a lack of carries. He’d led Porter’s Chapel Academy in rushing in 2020, but through five games of the 2021 season had a grand total of 35 carries. Even though PCA was winning and Washington was contributing in a number of different ways, he wanted to do more.

Eventually, he had a sit-down with head coach Blake Purvis, who told him to be patient.

“We got back (from Manchester Academy) and we talked for about 30 minutes, because I was frustrated about my yards and stuff,” Washington said. “He said, ‘I promise you, you’re going to have your yards by the end of the season.’ He gave it to me more often.”

Washington carried the ball nearly 100 times in PCA’s last six games. He wound up leading Warren County in rushing yardage and touchdowns, and earned a place in the county’s record books and football pantheon as the 2021 Vicksburg Post Offensive Player of the Year.

“I’m proud of everything I did here,” Washington said. “I wouldn’t have been able to do it without my offensive line. And Coach Purvis was the one who pushed me. At one time, I wanted to go to a different school. He made me stay here. He said, ‘You’ve got to trust me.’ It worked out.”

Washington has been a part of PCA’s football program since he was in seventh grade, although not always as a running back. He was a bit heavier when he was younger and started out as a defensive lineman.

“I told Purvis I wanted to play running back, and he told me I had to lose a couple of pounds. I came back that summer and had lost 20 or 30 pounds and finally got my chance at running back in JV, then they moved me up to varsity,” Washington said. “I told my parents I was going to be Offensive Player of the Year and they said, ‘You can do it.’ But I knew it was pressure on me, because the more I was saying it the more I had to get it. I’m happy I got this.”

It took a while for Washington to raise his game to that level. He rushed for 347 yards and five touchdowns as a freshman and led the team in rushing in 2019 and 2020. PCA moved to the MAIS’ 8-man division this season and, Washington laughed, he thought it would automatically mean a breakthrough season.

“I thought 8-man was going to be easy. I thought, ‘I could have 300 yards a game,’” he said, smiling and shaking his head. “Eight-man is just like 11-man. It’s not easy. Of course there’s going to be teams you can run all over, but there’s teams like that in 11-man. You go against these teams and they’ve got eight, but it feels like they’ve got 60 on the field. They’re everywhere.”

Washington was also held back at the beginning of the season, both as a conscious decision by Purvis and because of his own success. The coach wanted to split the workload and keep him fresh for later in the year. At the same time, Washington averaged more than 10 yards per carry in the first five games and all of them were blowouts one way or the other.

“There were some games where he could have racked up 400 or 500 yards. But knowing what we had coming down the stretch, and later in the year, preserving him helped us,” Purvis said. “His unselfish attitude early on, and knowing it was coming and he didn’t have to get it all in one game, I thought that was good. It helped him sustain success all year long.”

The turning point came in Week 6 against Wilkinson County Christian. Washington carried the ball 28 times for a career-high 250 yards and four touchdowns in a 52-27 victory.

It was the kind of performance, Purvis said, that was needed and expected from a star the caliber of Washington.

“He ran the same play 28 times. We played well up front that game and Willie (Rogers) did a good job leading for him. But there was no doubt after about the eighth or 10th time that we lined up to run it, what was coming,” Purvis said. “There were times they’d hit him in the backfield and he refused to give up. The effort and the power he was running with, it made it easy. It didn’t matter what the play was. Everybody in the stadium knew it was coming, but he was going to make yards and more times than not he was going to make an average play into a great play.”

Washington finished the season with 1,346 yards and 21 touchdowns — his first 1,000-yard season — and caught nine passes for 162 yards and three TDs. He was selected to play in the MAIS All-Star Game as well, and is the first PCA player to be selected as the Post’s Offensive Player of the Year since 2012.

His statistical totals also pushed Washington onto the list of Warren County’s all-time greats. He became the 11th player with more than 3,000 career rushing yards and the eighth to run for 38 touchdowns or more.

“I’m pretty proud of my season,” Washington said. “I was No. 2 in Porter’s Chapel in rushing and I wanted to hit No. 1. But I still think No. 2 is big progress from what Porter’s Chapel had been. I’m proud that I can be one of those people they’ll remember.”