HOPPY HOLIDAYS: Mississippi drinks 62.7 million gallons of beer at Christmas, and Vicksburg’s Key City Brewery is in that number 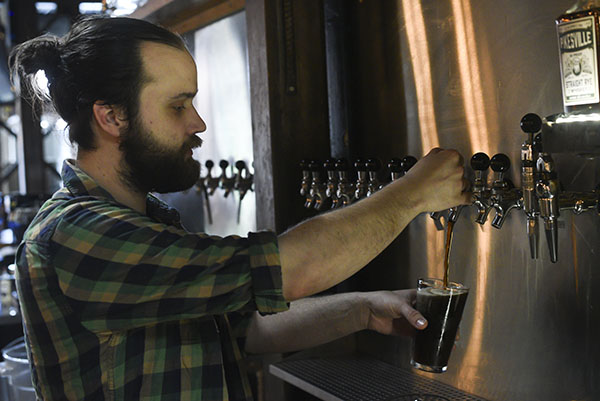 Key City Brewery owner Zack Erickson pours a glass of beer from one of the taps at Vicksburg’s only brewpub. (Photo by Courtland Wells | The Vicksburg Post)

Mississippians drink enough beer during the Christmas season to fill 95 Olympic swimming pools — and one-sixth of one of those pools is made up of Vicksburg’s Key City Beer.

According to a nationwide study by the group PR Pioneer, the Magnolia State ranks fifth in the nation for the most gallons of beer consumed over the festive period. Mississippi stands behind Montana, South Dakota, Missouri and Alabama, respectively.

Zack Erickson, owner and brewer at Key City Brewery in Downtown Vicksburg, said he’s not surprised to see Mississippi in the top five of suds-loving celebrants.

“We’re a thirsty state. The people that are passionate about beer are extraordinarily passionate about it,” Erickson said. “Unfortunately, most of that beer isn’t necessarily made in Mississippi, but I think especially here in Vicksburg, you see more and more people taking hometown pride in what we’re doing here and wanting to drink beers that have a connection to where they’re from.”

As more breweries open up across the state, Erickson made the case for beer-drinkers to choose craft brews over mass-produced lagers.

“They’re family owned businesses,” he said. “They’re people who have spent their life savings, made it their life’s work, pouring into a business that is making tax money for the state of Mississippi and providing people with jobs.”

Key City in particular has benefitted from legislation over the last five years which allowed them to expand their business.

In 2017, Erickson said, legislation passed to allow brewpubs to open in the state, which gave Key City the opportunity to open in Vicksburg. In 2020, legislation passed to allow pre-packaging of beers, meaning customers are now able to purchase four- or six-packs of their favorite local beers. This year, Mississippi approved a new license type, allowing microbreweries like Key City to distribute beer to grocery stores and restaurants for the first time.

In preparation for this change, Erickson and Co. are expanding into the old Willingham’s Department Store building next door. This space will solely be dedicated to production and canning, and will be 10 times larger than Key City’s current brewing space.

None of Key City’s success would be possible, Erickson said, without local support.

“From day one, Vicksburg has supported us and showed up thirstily. In a weird way, some of the pushback and fear of craft beer, or the misnomer that it’s a pretentious thing, we’ve over time been able to chisel away at that kind of thing,” he said. “It’s a ‘come as you are’ place. That’s why we have all the options we have.

“There are beers that are really easy to be an introduction to craft beer, classic styles in the pilsner range, and we go all the way up to stuff that’s more challenging. We try to give people pathways to explore their journey through the world of beer.”

Erickson said he was proud to know Key City’s products contribute to that total.

“That’s a sixth of an Olympic-size swimming pool. I’ll hang my hat on that.”