Keeping Christmas trees up through Epiphany part of seasonal tradition 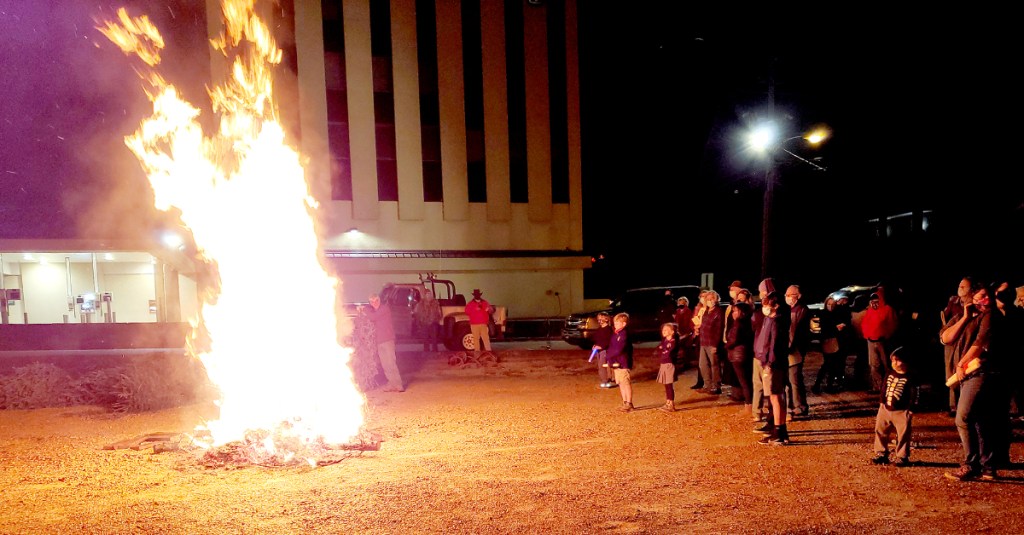 Members of the congregation of Church of the Holy Trinity watch as a pile of Christmas trees burn in a bonfire during a service marking the observance of the Epiphany in 2020. (Photo by John Surratt)

The traditional photographs of Christmas Day show a family seated around a Christmas tree decorated with heirloom ornaments and accented by strings of shiny, multicolored lights.

A photograph taken the next day, however, may show the children in the yard with their new toys and the formerly festive tree now cast by the side of the road, and the ornaments and lights put away for another year.

Some people may keep their tree up through New Year’s Day before casting it aside, but according to ages-old traditions, the Christmas tree is supposed to remain up through the feast of Epiphany, which marks the visit of the Magi, or the three Kings, to the Christ child. The feast day is the traditional end of the holiday season; the “12th Day of Christmas” is mentioned in the familiar Christmas carol.

“The main thing is the idea that the Christmas season itself extends through the 12 days to Epiphany,” said the Rev. Rusty Vincent, pastor of St. Paul Catholic Church. “So you would keep your Christmas tree up, your decorations up; you celebrate the season of Christmas not just the days of Christmas. The 12 days of Christmas begin with Christmas Day.”

According to an article on the London Daily Telegraph website, most people believe it is bad luck to take Christmas decorations down before the Epiphany. In ancient times, the article said, people believed that tree spirits lived in the holly and ivy.

After the season, they would be released outside, but if they were let go before Christmas ended, there could be problems with the harvest as a result.

According to the article, Christians in the West began celebrating Epiphany in the 4th century and up until the 19th century, and it was more important than Christmas Day. According to the Gospel of Matthew, the article continued, the three wise men — Melchior, Caspar and Balthazar — followed the star of Bethlehem across the desert to meet the baby Jesus, offering gifts of gold, frankincense and myrrh.

The gifts were symbolic of the importance of Jesus’ birth, the gold representing his royal standing; frankincense his divine birth; and myrrh his mortality.

“The word ‘Epiphany’ comes from Greek and means ‘manifestation.’ It celebrates ‘the revelation of God in his Son as human in Jesus Christ,’” according to the article. “The six Sundays following Epiphany are known as the time of manifestation; the last Sunday of the Epiphany is celebrated as Transfiguration Sunday.”

The Rev. Elisabeth Malphurs, the rector of St. Alban’s Episcopal Church in Bovina, said the 12 days of Christmas ends Jan. 5, on the eve of the Epiphany.

Epiphany, Malphurs said, is a season of light for Episcopalians, and is marked with the tradition of the burning of greens; taking the greens used to decorate for the season and burning them to mark the enlightenment of Christ’s coming to the world.

The Rev. Sam Godfrey, the rector of Christ Episcopal Church, said the Oxford Dictionary of the Christian Church indicates that in Herefordshire in England, there was a tradition of lighting 12 bonfires representing the 12 apostles to secure a blessing on the fruits of the earth. He said similar practices were held in other regions and included a decorated cake served on the 12th Night with a bean or coin baked inside. Whoever found the treasure became the king or queen of the festivities.

The tradition is also the start of the Mardi Gras season, which begins on 12th Night and runs through Ash Wednesday.

“Burning of the greens,” Godfrey said, “is our way of sharing the light of Christ.”

And while Christians observe Epiphany as the time the Magi came to worship the Christ child, Malphurs said, “The bigger theological message for us is this is the moment that Jesus Christ becomes known to a wider circle of people; that the light of Christ is coming to the whole world. So symbolizing that with light is a really good image, and a good bonfire is a better image.”