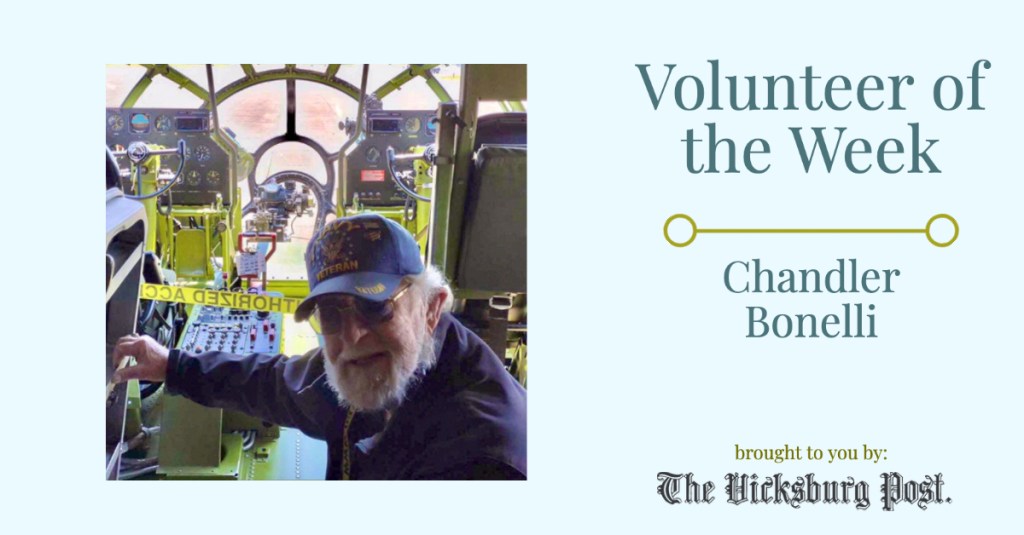 This week’s Vicksburg Post Volunteer of the Week is Chandler Bonelli, a volunteer with the Southern Heritage Air Foundation.

The Southern Heritage Air Foundation has a World War II and Aviation Museum that provides the history of local and regional WWII Veterans along with other historical relics. Bonelli is one of the many volunteers that help this “Living History” stay alive. Bonelli is a Vicksburg native who graduated from Culkin Academy on May 31, 1963, and on June 2 of that year, he moved to Great Lakes, Ill. for boot camp. He is a U.S. Navy Reserve and U.S. Navy Veteran.

For two years, he was sent to shore duty in Yokosuka, Japan, and returned. After his return, Bonelli for over 16 months was at the NAS Miramar in Squadron VC7. From 1974 until 1979, he worked at the Central Fire Station in Vicksburg as a firefighter, and for 43 years worked as a local and over-the-road trucker. Bonelli also attends The Church of the Holy Trinity.

How did you hear about the program?

Dan Fordice was talking about the Museum and Foundation at an Army-Navy Club Meeting. I was interested in volunteering, so I called the Museum.

What is your favorite memory while volunteering?

I have too many but here are a few: meeting Ms. Patty (Mekus), Ms. Sherry (Grimsley) and the other volunteers; giving tours to students; being around other Veterans and flying in the P-51 and T-6 and other aircraft.

What are your activities and what do they involve?

Cleaning aircraft, giving tours, and building & maintenance work. Pretty much anything Fordice, Mekus and Ms. Sherry ask me to do.

What have you learned from volunteering with this organization?

I have learned the stories of the Veterans here and what Fordice, Mekus and Grimsley represent to all of the Veterans, Purple Hearts, POWs, MIAs and the community, and am proud to do that as well.

How has this changed you?

I am probably more patriotic now than I have ever been and enjoy working with the other volunteers. I enjoy coming here and am proud of being a part of what all we do. Honoring America’s heroes like my dad, my Godfather (and namesake) and all who have served and are currently serving.

If you have a family member that has served, learn their story. The veterans of every branch of service have stories they may not want to tell, but respect them and what they have done for you to live in this free country. And if you are a veteran and want something to do with your time, even if it’s just a few hours, come volunteer at the Southern Heritage Air Foundation! Go Navy, Beat Army!

If you would like to nominate a volunteer to be featured, please submit their name and contact information to volunteer@vicksburgpost.com.