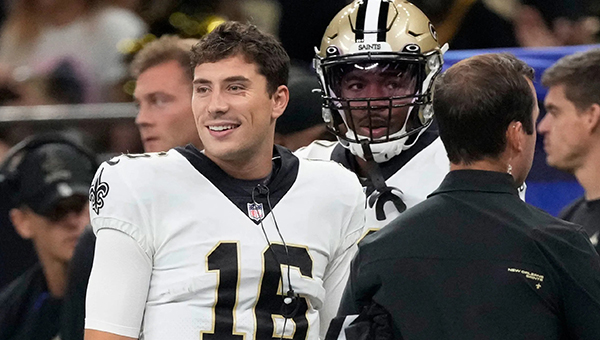 Now, because of a COVID-19 outbreak infecting at least 15 Saints players and several coaches, Book is on the brink of seeing how ready he really is.

The rookie out of Notre Dame took snaps at practice Friday as New Orleans’ No. 1 QB and is slated to make his NFL regular-season debut as a starter against the Miami Dolphins in the Superdome on Monday night.

“It’s an unbelievable opportunity,” Book said. “I don’t know what it’s going to feel like. I’ve played in big games, but I think this is the biggest, obviously. We’re professionals now and this is Monday Night Football.”

Book, who has been inactive for the first 14 games of his career, figured he’d play when regular Saints starting quarterback Taysom Hill called Thursday to inform him he’d tested positive for COVID-19. Siemian also had tested positive shortly before Hill, leaving Book as the only active QB on the roster.

“I did the math there pretty quickly,” Book said.

There’s also a chance that Hill or Siemian could test out of COVID-19 protocols in time to be activated Monday night, but Book said he can’t afford to consider that possibility.

“I’m planning on playing,” Book said. “You can’t just flip that switch on Monday morning, trying to get ready. It doesn’t work like that, especially at the quarterback position.”

When Book receives play calls in his helmet’s ear piece, the voice he’ll hear will be Payton’s. The coach returned to practice Friday after his own bout with COVID-19 forced him to isolate for about a week and miss the team’s victory at Tampa Bay on Sunday night.

While Payton said Book is throwing well and appears to be a good “student of the game,” he also stressed that it’s up to coaches and the whole team to help Book play to his strengths and get comfortable.

“Obviously, you have a new quarterback, but it’s more than just the quarterback,” Payton said. “It’s everyone else painting the right picture, us playing well in the kicking game and on defense.

“He’s going to do fine. He’s excited about the opportunity,” Payton added. “It’s up to us to give him the right things relative to the game and where we’re at offensively.”

The timing seems fortuitous for Book. His family is visiting for Christmas, including a brother who’s been in Army boot camp at Fort Benning, Georgia. They all plan to attend the game, as does Book’s former Notre Dame coach Brian Kelly, who left the Irish at the end of college football’s regular season to take over at LSU.

And Book’s first chance also comes after months of seeing and studying how Payton’s offense is supposed to work. Every time there was a snap in practice or a game, Book noted, “I got to take it mentally.”

Payton said he isn’t worried about Book’s poise — not after all the big games in which he played for Notre Dame, where Book won a school-record 30 games in four seasons.

“He’s played in real big games and he’s done it consistently — if you’re measuring wins and losses — better than any quarterback in Notre Dame history,” Payton said. “Obviously, there’s a transition to this level, but I think he’s up for the challenge.”

“I’ve got this whole team behind me,” Book said. “I feel like all these guys got my back and just to hear everyone, how excited they are that I get a chance, is pretty cool.”

Of course, the same virus outbreak that presented Book with this opportunity also has robbed the roster of several prominent players this week, including linebacker and defensive captain Demario Davis, safety Malcolm Jenkins and right tackle Ryan Ramczyk. But Book doesn’t sound fazed.

“There’s a million excuses out there is what I’d say, and we’re going to use none of them,” Book said. “Just got to go out there and play, have fun. It’s football.”