Leach looking for payback from — and against — Texas Tech 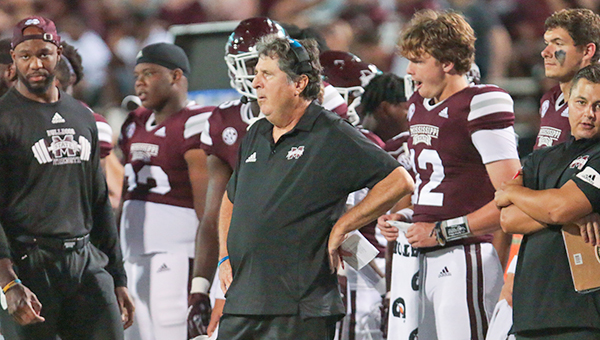 Mississippi State football head coach Mike Leach stands on the sideline earlier this season. Leach will face one of his former teams, Texas Tech, in the AutoZone Liberty Bowl on Tuesday. (Walter Frazier/For The Vicksburg Post)

MEMPHIS (AP) — While Mike Leach certainly has overhauled Mississippi State’s football program in two short seasons, some of his fingerprints remain on Texas Tech years after he was fired by the Red Raiders.

Leach will get his first chance to face off against one of his former programs and coach against a former player Tuesday when the teams meet in the Liberty Bowl.

The matchup is personal for Leach for other reasons, too. He hasn’t forgotten how his tenure at Texas Tech ended or the money he believes he’s still owed.

“We should get this thing settled,” Leach said Monday. “They should pay me. And, you know, we should all celebrate achievements together. But that doesn’t seem to be, you know, what they have in mind.”

Leach not only remains the winningest coach in Texas Tech history with his 84 wins between 2000 and 2009, the Red Raiders’ interim head coach Sonny Cumbie played for Leach between 2002 and 2004. There’s still litigation pending over Leach’s departure when fired in late 2009 after a 9-4 season.

“They cheated me out of $2.6 million dollars plus four years remaining on my contract contract, and I think settling for $2.6 (million) is very generous on my part,” Leach said.

Rogers has thrown for 300 yards in 10 straight games. He leads the Southeastern Conference and ranks second nationally with a school record 4,449 yards passing as the eighth SEC quarterback ever to reach the 4,000-yard mark in a season.

A victory will ensure the Bulldogs’ best finish since winning eight games in 2018 after finishing the regular season with a 31-21 loss to then-No. 8 Ole Miss.

Cumbie walked on at Texas Tech as a player for Leach, who later awarded him a scholarship. Leach also gave Cumbie a job as a graduate assistant. Cumbie said he has a ton of respect for his former coach and boss but notes neither will be playing.

This has been a rough season for Texas Tech. Cumbie is 1-3 since replacing Matt Wells who was fired Oct. 15. He’s leaving to coach Louisiana Tech with Joey McGuire already hired to take over the program after this bowl, sponsored by AutoZone.

Cumbie’s focus is finishing this job and helping the Red Raiders to have some fun. Texas Tech is coming off a 27-24 loss to then-No. 9 Baylor.

“It’s just not a football game,” Cumbie said. “It’s a 13th game that our guys have earned.”