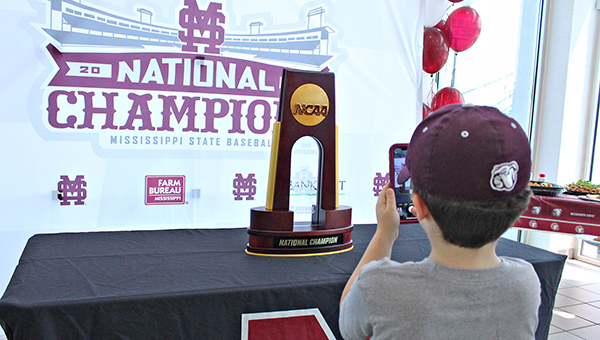 Vicksburg resident Will Mashburn takes a picture of Mississippi State's 2021 baseball national championship trophy at Kirk Brothers Ford in late July. The trophy was brought to the car dealership as part of a weeklong tour through Mississippi, and dozens of MSU fans dropped in to see it and pose for pictures. (Ernest Bowker/The Vicksburg Post) 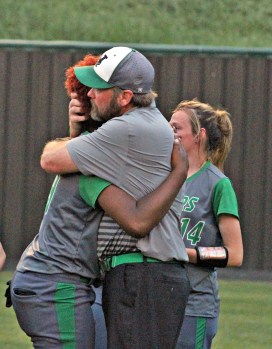 Vicksburg High softball coach Brian Ellis, right, hugs player Kellisia Walker after a playoff loss to New Hope in May. Vicksburg was eliminated from the playoffs with the loss. (Ernest Bowker/The Vicksburg Post) 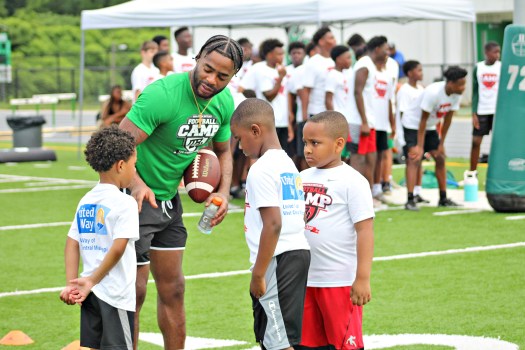 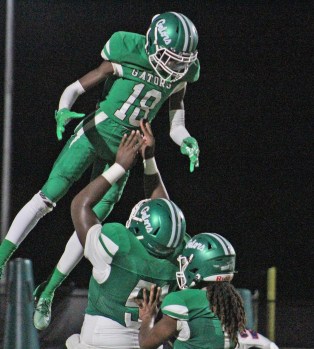 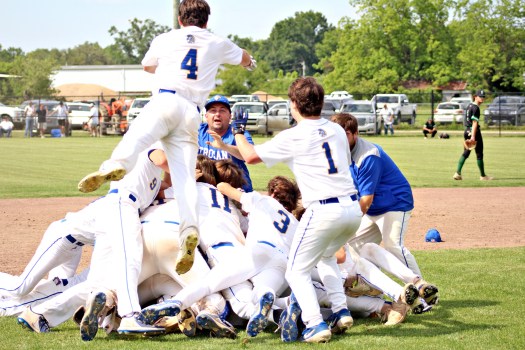 Tallulah Academy's Walker Sullivan (4) jumps onto his teammates to complete their dogpile after they beat Calhoun Academy 2-1 to win the 2021 MAIS Class 1A baseball championship. (Ernest Bowker/The Vicksburg Post) 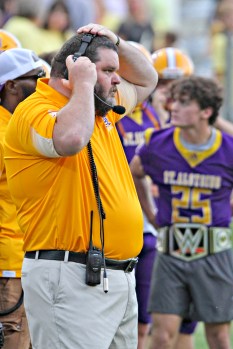 St. Aloysius coach Bubba Nettles watches his team. Nettles was one of a number of high school head coaches who made their debut in Warren County sports this season. (Paul Ingram/For The Vicksburg Post) 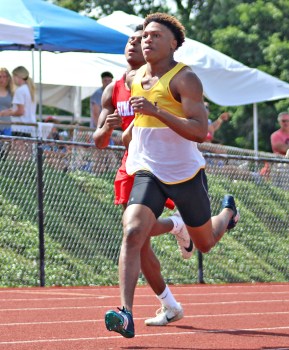 St. Aloysius' Brennon Williams runs in the Class 4A boys' 400 meter dash at the MAIS Overall Track Meet in May. Williams won the race with a time of 50.32 seconds. (Ernest Bowker/The Vicksburg Post) 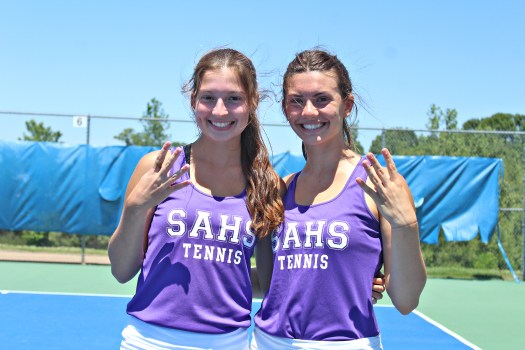 St. Aloysius tennis players Taylor Chewning and Ashley Jarrat pose for a photo after winning the MAIS Class 4A No. 1 girls' doubles tennis championship in May. It was Chewning and Jarratt's fourth consecutive state doubles championship. (Ernest Bowker/The Vicksburg Post)

Mississippi’s biggest party of the summer started in Nebraska, flowed through the streets of Starkville, and touched every small town and big city in the state during a monthlong blowout.

Generations of angst and frustration evaporated as Mississippi State’s baseball team won the College World Series — the school’s first national championship in any sport — and celebrated with the masses. A parade and rally in Starkville was followed by a victory lap around the state in which a 2-foot tall hunk of wood attained rock star status.

The Bulldogs’ national championship trophy made its appearance in Vicksburg in late July, and a couple hundred fans came to Kirk Brothers Ford to take pictures and share memories with each other. The trophy only spent a couple of hours here, but its mere presence in the state was easily the top sports story in Mississippi for 2021.

“It’s been incredible. Each place we’ve gone, we’ve been able to hear some different stories of people and what the trophy means to them and their family after being a Mississippi State fan for so long,” Matt Meyer, an assistant director of marketing in MSU’s athletics department who chaperoned the trophy during its statewide tour, said in July. “It’s just been really, really cool. It’s an incredible experience you can’t put into words.”

Mississippi State defeated Vanderbilt 9-0 in the College World Series championship game on June 30. On their way there, the Bulldogs won four elimination games in the NCAA Tournament and outscored Vanderbilt 22-2 in the last two games of the CWS championship series.

The ride was as fun as the final triumph, and getting a chance to spend a moment with the national championship trophy was one MSU fans will always treasure.

“I’ve been a State fan since I was itty bitty. I have been really into Mississippi State baseball since Ron Polk, of course, and Will Clark and Palmeiro,” Vicksburg resident Cecile Hesselberg said during the trophy’s visit to the city in July. “I’ve followed them all of these years and this is just a once in a lifetime moment that we win the championship. I thought that once they won I would be jumping up and down, but it was more like disbelief.”

Mississippi State’s national championship was the biggest sports story in Mississippi in 2021, but there were plenty of other noteworthy stories and storylines during the year on the local level in Vicksburg:

• Vicksburg High’s softball team had a playoff series victory snatched away in April.

The Missy Gators won the last two games of their best-of-three MHSAA Class 5A second-round series against New Hope, only to have the outcome reversed following an appeal. New Hope coach Casey Finch-Halford lodged a protest with the MHSAA late in Game 3, claiming that an illegal ball had been used. The MHSAA upheld it, negated Vicksburg’s 9-6 victory, and ruled that Game 3 must be replayed in its entirety.

New Hope won 9-5 in the replay to end Vicksburg’s season, but the Missy Gators were still able to hold their head high in defeat. A limited number of 250 tickets were made available for the game, and those sold out in less than 24 hours. Fans packed the Softball Swamp for Game 4 of the series, and the Missy Gators thanked them with a victory lap afterward.

• Warren County’s high school football teams enjoyed a largely successful season. Three of the four made either the MHSAA or MAIS playoffs and finished with a winning record.

Vicksburg High and Porter’s Chapel Academy both hosted playoff games for the first time since 2008, while Warren Central extended its streak of postseason appearances to 10.

A dozen players from the county were selected to All-State or All-Star teams — or both.

•  Vicksburg’s biggest football star, Malcolm Butler, endured a tumultuous year that ended with his retirement from the game.

The two-time Super Bowl champion was released by the Tennessee Titans in a salary cap move in early March, then signed a one-year contract with the Arizona Cardinals two weeks later.

Butler never played a regular-season down for the Cardinals, however. In late August the team placed the cornerback on the reserve/retired list as he dealt with an unspecified personal issue, and he has not returned to the team.

During an interview at his annual youth football camp at Vicksburg High in July, about a month before he stepped away, Butler said he was looking forward to playing a few more years in the NFL. Butler has not spoken publicly about the reasons behind his decision to retire, however, and it’s unclear whether the 31-year-old will try to make a comeback in 2022.

Warren Central, meanwhile, bid farewell to longtime football assistant coach Ross Coley. He had worked in the program for 18 years and filled a number of other roles as well, from assistant archery coach to public address announcer to clock operator.

In June, Coley announced that he had been hired as the football head coach at Thrasher High School in Northeast Mississippi.

“It was really emotional, but these opportunities don’t come along very often. It took me 18 years to get this one,” Coley said in June. “I’m sad to leave because I’ve made so many great friends here. But it’s an opportunity for me as a coach to grow. A ship is safe in harbor, but a harbor is not where a ship is meant to be.”

In the college ranks, Sam Temple stepped down after 16 seasons as Hinds Community College’s baseball coach. He took a job as the head baseball coach and assistant athletic director at Clinton High School.

The Vicksburg native won three Mississippi state titles at Hinds, and led the Eagles to two appearances in the NJCAA World Series. His 2014 team was the national runner-up. Nearly 150 of his players signed with four-year schools.

“There’s no way I can put into words how proud I am of this program, and the players that have played and the coaches that have coached in this program,” Temple said in April. “I learned very early in my career that if you surround yourself with good people then good things will happen, and that is what I’ve tried to do.”

• Just across the river, Tallulah Academy won its first MAIS baseball title by sweeping the Class 1A championship series from Calhoun Academy in May. Todd Etheridge hit a two-out double in the bottom of the seventh inning of Game 2 of the finals to give the Trojans a 2-1 victory.

Tallulah finished the season with a 26-1 record and won its first MAIS baseball title after reaching the Class 1A semifinals in 2018 and 2019.

“We ended up short in football. It’s a good thing to finally finish a sport all the way through like it’s supposed to be done,” said Walker Sullivan, a senior who scored the game-winning run in Game 2 against Calhoun. “It’s a good feeling. I’ll remember it for a long time. It’s my last sport. The last event for Tallulah Academy, so it’s a good way to end it.”

It was Vicksburg’s third powerlifting state title, along with others won in 2003 and 2006. It is also Vicksburg High’s first team state title in any sport since 2006.

In early May, St. Aloysius tennis players Taylor Chewning and Ashley Jarratt capped their careers by winning the MAIS Class 4A No. 1 girls’ doubles championship.