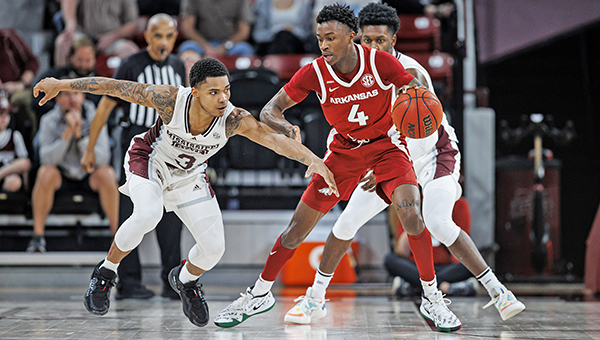 STARKVILLE (AP) — After a series of stops and starts to his season, Tolu Smith wasted no time revving right into high gear.

Smith scored 18 points and had a career-high five steals, and Mississippi State pulled away in the second half Wednesday to beat short-handed Arkansas 81-68 in the Southeastern Conference opener for both teams.

Smith shot 5-of-8 from the field and 8-of-10 from the free throw line after missing the previous four games because of a broken toe. He played 25 minutes and had six rebounds and five steals to go along with his 18 points.

“Mentally it was tough to sit out,” Smith said. “We expected things that we wanted to come from this season. Being able to come back is all God’s glory. I’m thankful for my coaching staff and teammates for allowing me to come back with open arms. It’s great to be back.”

“I know how important this game was to start off the right way in the conference against a very good team, a team in Arkansas that will be in the NCAA Tournament,” Mississippi State coach Ben Howland said. “That’s huge for us in terms of our (NCAA) NET (ranking).”

Senior JD Notae, who is averaging a team-high 18.0 points per game this season, and freshman Chance Moore did not play for the Razorbacks (10-3) due to illness. Notae, who was named the SEC’s sixth man of the year last season, has scored in double figures in each game and his 2.7 steals lead the conference.

Kamani Johnson, a junior forward who transferred to Arkansas from Arkansas-Little Rock, has been suspended from the program indefinitely.

Smith, who hadn’t played since an 81-76 loss to Minnesota on Dec. 5 due to a broken pinky toe on his right foot, threw down a dunk with 11 seconds left in the first half to make it 33-31 and Mississippi State led the rest of the way.

Molinar made a jumper to push the lead into double figures for good and then hit two free throws that capped a 13-4 run and made it 59-47 with 11:26 left.

“We were told to finish out strong and come out first. Coach (Howland) stressed that the first few minutes of the second half was going to be important. He told us to come out, play hard and compete. That’s what we did,” Moore said.

Stanley Umude, a graduate transfer from South Dakota, tied his season high with 19 points on 7-of-12 shooting for Arkansas. Davonte Davis also made 7 of 12 from the field and finished with 15 points, five assists and two steals.

“I thought we did a tremendous job in the first half rebounding the basketball and a not very good job in the second half,” Arkansas coach Eric Musselman said. “So, when you add the difference in the offensive rebounding, the turnovers we had. Then, you add in the fact they took 28 free throws to our 14. I’m surprised it was a 13-point game and not a larger margin.”