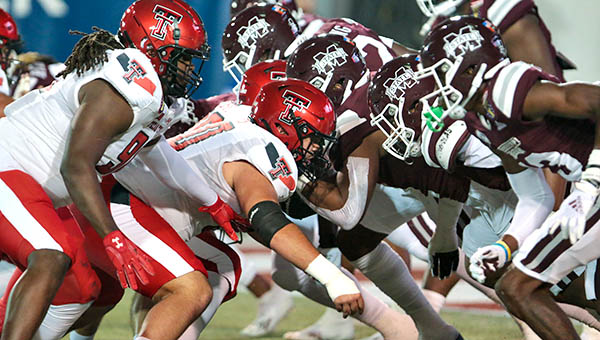 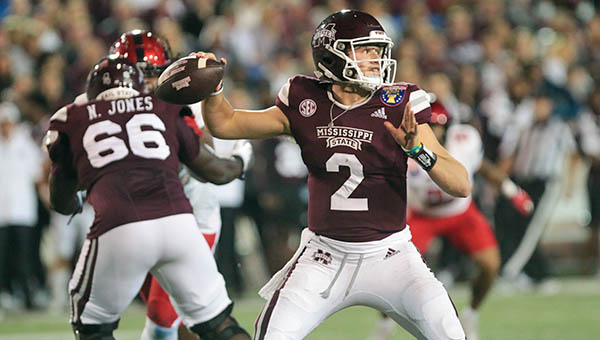 Mississippi State quarterback Will Rogers (2) throws a pass against Texas Tech in the AutoZone Liberty Bowl. Rogers passed for 290 yards and one touchdown, but Texas Tech routed the Bulldogs 34-7. (Walter Frazier/For The Vicksburg Post) 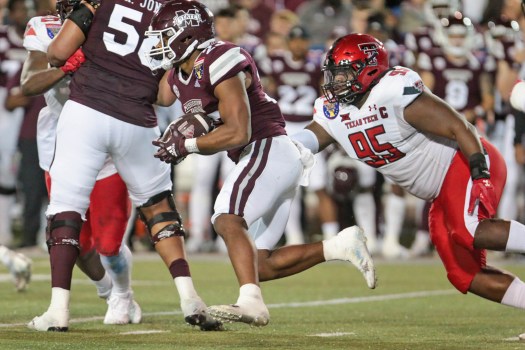 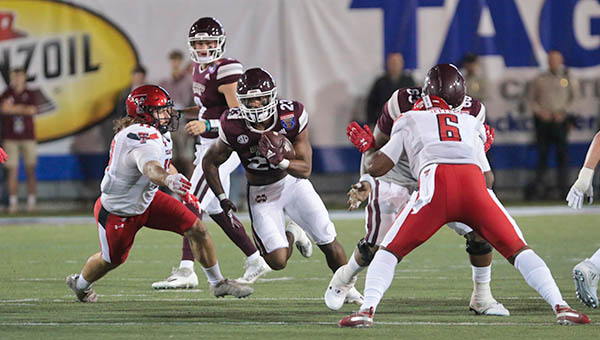 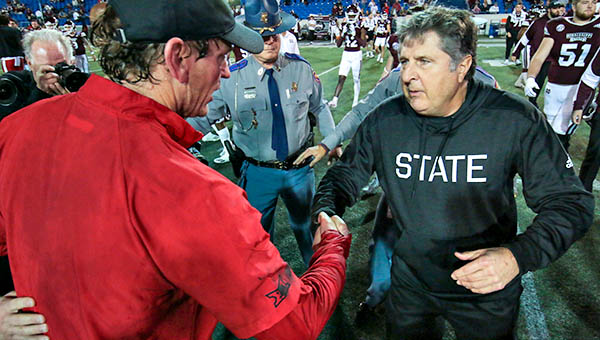 MEMPHIS, Tenn. (AP) — Donovan Smith threw for 252 yards and a touchdown and ran for another score, and Texas Tech beat Mississippi State 34-7 in the AutoZone Liberty Bowl on Tuesday night.

Tahj Brooks rushed for 107 yards and a touchdown and SaRodorick Thompson ran for 80 yards and a score for the Red Raiders (7-6), who finished with a winning record for the first time since 2015. They were appearing in their first bowl game since 2017.

Texas Tech rushed for 260 yards against a Bulldogs defense that came in allowing 101 yards per game on the ground.

“Their defensive front is very good,” Red Raiders interim coach Sonny Cumbie said. “We felt with some of our run schemes and some of our motions, we would be able to hit some creases. And our running backs broke some tackles. They were a good opponent, but I did feel we’d have the ability to run the football.”

Mississippi State (7-6) fell short in coach Mike Leach’s first game against a former program of his. Leach, who went 84-43 at Texas Tech from 2000-09, failed to become the first Bulldogs coach to end each of his first two seasons with a bowl victory. Mississippi State was playing in its 12th straight bowl game.

Cumbie, a former player at Texas Tech under Leach, ended his five-game run with a 2-3 record. Cumbie, who is departing to become Louisiana Tech’s coach, took over for Matt Wells in October.

“It’s a sense of relief and accomplishment,” Cumbie said. “In these bowl games, the most excited team that shows up is the one that comes out on top. That’s what this team did.”

Leach’s prolific offense never could get rolling against the Red Raiders and the resulting lopsided loss dropped the Southeastern Conference to 0-4 in the postseason. The Bulldogs were held scoreless in the second half and finished with 344 yards, 105 below their average. Mississippi State was without three offensive linemen, including All-SEC left tackle Charles Cross, a projected top 10 pick in the NFL draft whop opted out of the game. Nearly a dozen players did not play because of COVID-19 issues.

Texas Tech put the game out of reach with two third-quarter touchdowns. Smith scored on a 1-yard run to cap a 95-yard drive, the Red Raiders’ second-longest of the season. Smith, who was named the game’s MVP, completed passes of 39 and 52 yards during the drive. He added a 14-yard touchdown pass to J.J. Sparkman with 2 seconds remaining in the quarter.

Thompson scored his touchdown on a 1-yard run midway through the final quarter for a 34-7 lead.

Texas Tech established the run at the outset, gaining 145 yards in the first quarter and using its physical play to take a 10-0 lead. The Red Raiders moved 75 yards — all on the ground — on the game’s opening possession, scoring on a 19-yard run by Brooks.

“I felt that ignited us,” Smith said. “We knew we had to come out and score.”

Mississippi State answered on its next series with Will Rogers converting on third-and-11 on the Red Raiders 38 to extend the drive. Rogers evaded a strong rush before finding Jo’quavious Marks for 18 yards to the 20. Two plays later, Rogers fired a 17-yard scoring pass to Rara Thomas.

The Red Raiders took advantage of a Bulldogs miscue in the closing seconds of the half to go up 13-7. Mississippi State punt returner Austin Williams muffed a Texas Tech punt inside the Bulldogs 20-yard line and Jake Bishop recovered at the 14 with 31 seconds remaining. Garibay added a 26-yard field goal with 13 seconds left.

Mississippi State was held to 126 yards in the first half. Rogers, averaging 372 yards passing per game, managed 103 yards on 10-of-17 passing in the half and finished with 290.