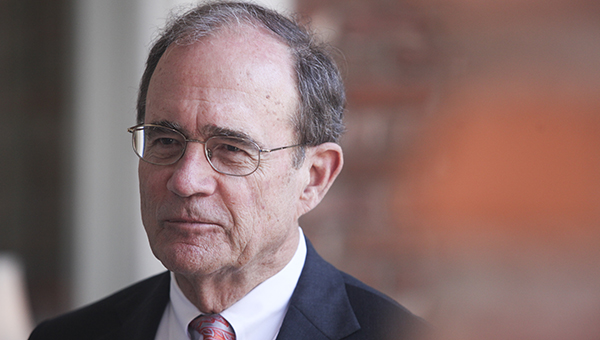 “To be specific, Warren County got $8.8 million (in ARPA funds) and Vicksburg got $5.3 million,” he said. “Between the two, they got $14.1 million. What were talking about in the Legislature — at least on the Senate side — we are very interested in having this be matched with what goes in the ground.

“If a city or a county decides that they want to give everyone a bonus, that’s only a one-year thing and there’s no need for me matching it.”

If a city or county wants to invest money in a capital project for long-term growth, Hosemann said, “That’s something the Legislature would be interested in.

“It’s really a decision on the local level how they want to spend their $14 million, but basically the government sent them (Warren County and Vicksburg) $14.1 million and the Legislature could match that, so you would have $28 million to spend on infrastructure if the supervisors and the Board of Mayor and Aldermen choose to do so.

“I’m very hopeful that all cities and counties take the view that they can double the money that they didn’t anticipate in the first place to use it for infrastructure — water, sewer and bridges — that’s what it’s there for,” Hosemann said.

The questions over how to spend the state’s ARPA funds and $3.6 billion in federal infrastructure money are two of the issues pending as the 2022 session of the Legislature prepares to convene Tuesday. Those issues also include medical marijuana, the state’s initiative law, redistricting and the state budget.

And hovering over the state is an issue that affects not only Mississippi but the rest of the country.

“My biggest concern is not how we spend this (ARPA) money, but the cost of living for families,” Hosemann said. “We’ve had 5- and 6-percent increases over the past few months and that really eats into the spendable income for a family.

“Spending this money will be reviewed by 122 members in the House and 52 in the Senate, so it will be thoroughly vetted by the public and the representatives. We don’t have a lot of control over inflation at the state level and I remain very concerned about that part.”

Another issue affecting families this year is health care.

“We did hospital and ICU beds last year,” Hosemann said. “We’re looking at a nurse retention program to keep our nurses there (in hospitals); I’m very fearful of having a recurring spring like we had last year with the new version of the Coronavirus.”

Hosemann said he has met with Dr. Thomas Dobbs, the state’s health officer, and other public health officials, adding, “They indicate that this one (the Omicron variant) spreads faster even though it is less severe in some cases.

“I’m very concerned about that; we’ve had some outbreaks around the capital and I’m looking at different groups, and I’m afraid with the Christmas season that we’re going to have a large number of those problems that come out with health care,” he said. “We’re looking at that.”

Hosemann said he believes the Legislature will pass a medical marijuana bill early in the session.

“That’s been the most-vetted bill in the Legislature that I can remember; the governor and everybody else has weighed into it the last six to eight months,” he said.

The state Supreme Court shot the medical marijuana initiative down, and in doing so, vacated the state’s initiative law that allows voters to amend the state constitution through the ballot process. Hosemann said he sees the Legislature addressing initiatives.

Another area he wants to address is Mississippi’s state parks.

“Our state parks are an abysmal failure,” he said. “We have tremendous physical assets there and they have been neglected for a long time. We’ve got some information that they needed $100 million to get them back to some operational base so people will have the opportunity to take their children someplace nice.”

And while the primary goal is to enable state residents to enjoy the parks, Hosemann said, “It’s a great impetus for our tourism trade, particularly when we’ve got pandemics. People like to go to their own place and park their RV or their camper and be out in the open.

“So not only are we harming our people, we’re cutting our tourism dollars by not having our parks in some representative place and they’re not right now.”

Hosemann said the influx of federal revenue during 2021 has created an estimated $1 billion surplus coming into fiscal 2020 but the Legislature needs to be careful how it spends the money.

“Whatever the Legislature does, the most important thing is that we do some tax relief.

Hosemann said, however, that as he watches inflation and looks at the future, the state is not always going to have the infusion that was motivated by the COVID-19 pandemic.

“What I’m going to encourage is the Legislature be very careful and very specific in its utilization of these funds over a period of years, for a number of reasons,” he said. “One, We want the economic benefits to continue for not just one year.

“Two is these funds, if you tried to allocate them all to capital projects, there’s not a capacity for the capital expenses — the hard assets to even be purchased or find somebody to even put them in the ground right now, so it would be very hard to award all of that and actually have it done.

“Third, we worry about the long-term other side of this. I remember when we had inflation and Jimmy Carter had 20 percent (unemployment) rates. We want to be careful that we are very meticulous going forward in an organized and prudent way not to try to slam that money in the economy to provide some tax relief and some organized things that need to be done.

“We need a teacher pay raise, we’ve got a lot of infrastructure needs and those have to be allocated as we go along and not just necessarily do everything in one year,” he said. “I think we’ll end up in a couple of years not having anything to show for it.”