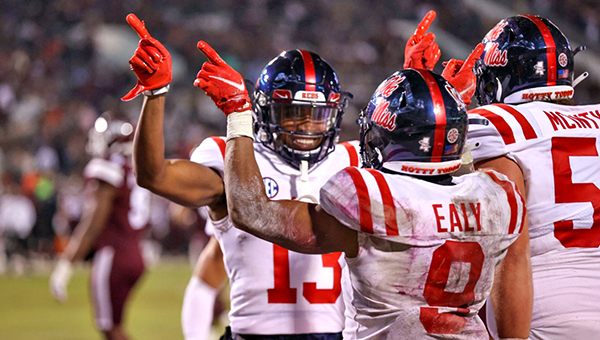 Could Kiffin put his checkered resume behind him and spark a struggling program back to life?

Could Aranda make the transition from defensive coordinator to a successful head coach in his first shot at the big job?

The answer to both questions, as of right now, is yes.

Kiffin and Aranda both guided their teams to double-digit win totals in their second seasons. Their paths will converge Saturday night in New Orleans, where Ole Miss (10-2) takes on Baylor (11-2) in the Sugar Bowl.
Ole Miss won seven of its last eight games after losing at No. 1 Alabama on Oct. 2. Its other loss was Oct. 30 at Auburn.

The Rebels are playing in a traditional New Year’s Day bowl for the second year in a row under Kiffin, after going four consecutive seasons without qualifying for any bowl. This is Ole Miss’ 10th appearance in the Sugar Bowl, which is the fourth-most of any school.

“It says a lot about our players, that two short seasons, with COVID shortening the first one and no spring that year, to be in the Sugar Bowl,” Kiffin said at a press conference earlier this week. “And crazy enough, someone said the other day, ‘What if you would have played well versus Auburn?’ I don’t even know if that’s allowed. Are there three SEC teams in the playoffs, because we’re sitting there at 11-1? That’s crazy to think that you are even that close to that level in year two.”

Baylor claimed the Big 12 championship — a year after it finished 2-7 in the COVID-marred 2020 campaign — but two regular-season losses kept it from seriously contending for a spot in the College Football Playoff.

The consolation prize for both teams is an intriguing matchup against each other. It’s the only college game on TV on New Year’s Night, and Aranda said it was a good showcase.

“I think there is a stage there,” Aranda said. “There is a platform that we can, whether it’s people we interact with at the hotel, people that are on our plane, the fans that are coming to see us, all the people that are going to be watching on TV, it’s going to be an introduction to Baylor University. It’s going to be an introduction to Baylor football. And then, to all of our last names in terms of not so much what we do, but how we do it and in terms of what drives us. I think that comes out. So, we want to put our best foot forward in regards to that.”

Getting onto the field has been no easy task this bowl season. Nearly a half-dozen games have been canceled or rescheduled — some just hours before kickoff — because of COVID issues.

To limit exposure, both Baylor and Ole Miss delayed their arrival in New Orleans until Wednesday, two days later than originally planned.

“Ideally from a COVID standpoint, we would come in like a road game, the night before. Why are you going to go somewhere early, have your kids walking around a different city, around different people? Picture a week of walking around Bourbon Street and everything, I don’t think that’s really up there high on COVID protocol,” Kiffin said. “So we stayed as long as they would let us (in Oxford), actually, because of that. It’s easier to monitor kids, have them here where they are used to.”

Ole Miss has also managed to keep its team together through another trend. Although some players like quarterback Matt Corral and defensive end Sam Williams are NFL prospects, no Ole Miss players have elected to opt out of the game.

“I think it’s awesome. We didn’t have a conversation. It’s not like someone came in wavering and we had to talk them out of it, or go over the pros and cons,” Kiffin said. “I think it says a lot about this team. It shows the culture that’s been created here and the improvement from year one to year two, also, when you look at that. It takes a while for your culture to set in. So that was really cool to see, to not have to deal with that.”

Baylor also has not had any opt-outs, although it will change quarterbacks for the Sugar Bowl.

Blake Shapen, the Big 12 championship game MVP, will not play because of a shoulder injury, Aranda said. He will be replaced by junior Gerry Bohanon, who started the first 11 games of the season before suffering a hamstring injury.

Bohanon passed for 2,160 yards and 17 touchdowns before his injury, and also ran for 303 yards and nine TDs. Shapen started the Bears’ last three games and played in three others, totaling 596 passing yards and five touchdowns.

Baylor also ranks 16th nationally with 214.7 rushing yards per game. Running back Abram Smith has rushed for 1,429 yards and 12 touchdowns. Ole Miss ranks ninth in rushing, with 224.2 yards per game.

“Gerry’s been good. He’s been throwing the ball better and better,” Aranda said. “I think towards the end of the week, he was at his best. Anticipating him to just take off from there. I think confidence-wise, very strong, able to run, open up, and do all the things that we’ve been accustomed to seeing him do.”