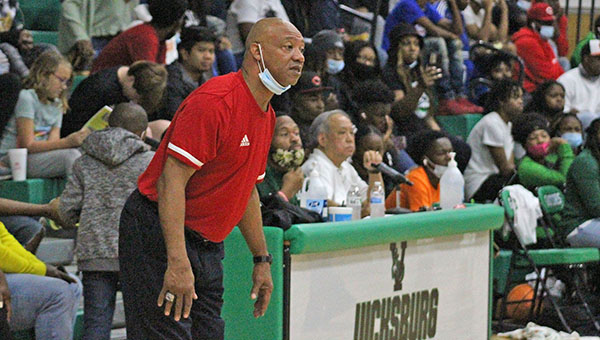 Warren Central girls' basketball coach Darein Hilliard watches his team from the bench during a game against Vicksburg in November. Hilliard has the Lady Vikes off to a 12-6 start, after they won five games all of last season. (Ernest Bowker/The Vicksburg Post)

This is a bit of a weird week. There’s both a lot going on and not much going on, or it’s hard to quickly summarize what’s going on, and since it’s a short week we’ve got to get going on.

The upshot is that when you can’t keep one thought in your head and the deadline clock is ticking, it’s time to share a bunch of them in another edition of random sports thoughts:

• This college football bowl season has been almost unwatchable. A handful of games have been entertaining, but it’s getting hard to know who is playing and when — or even if they’re playing.

The trend of players opting out to prepare for the NFL draft has increased, so the teams you’ve followed for four months often bear little resemblance to the ones that show up for the bowl game. The latest wave of COVID has only added to that phenomenon.

On top of it, COVID has led to about a half-dozen bowl games being canceled. Some of them were literally hours before kickoff.

These are only meaningless exhibitions. I get it. But if we’re going to put them on the schedule, then let’s play.

• Speaking of bowls, Mississippi State … yikes. At least baseball season is right around the corner.

• There are so many different ways to write about what John Madden has meant to the world of football that it’s impossible to boil it down to a couple of paragraphs.
For people who grew up in the 1970s, he was a great coach with the Raiders.

For people like me, who came of age in the 1980s and 90s, he was part of the sports soundtrack of our youth. He and Pat Summerall, calling a game as late-afternoon shadows fell across San Francisco’s Candlestick Park or Dallas’ Texas Stadium, or wind gusted around Giants Stadium, was the definition of a big game.

And then, for people who have grown up in the 2000s and 2010s, he was the face of a video game franchise that taught them the ins and outs of football without even realizing it.

A person who can reinvent themselves and remain universally beloved for 50 years is a rare and special individual. We truly lost a sports legend this week.

• As we head into 2022, it looks like some of Warren County’s girls’ basketball teams might be putting together big seasons.

The Vicksburg Missy Gators are 14-4 and have won 10 of their last 11 games. They’ve ripped through their region schedule the past couple of years and seem more than capable of doing so again.

Coaches Troy Stewart and Darein Hilliard have done great jobs in putting both programs in a position to be successful. Hopefully things look as good in late February as they do in December.

• Game shows involve competition, which for the moment means I’m going to consider this a sports thought.

Caught the “Price is Right” 50th anniversary special the other night and got all wistful. Along with the John Madden tributes, seeing the classic games sent a wave of nostalgia washing up on the beaches of my mind. That show was a staple during summer vacation or on sick days growing up. Even now it’s one of the few reliably entertaining daytime TV options.

The Hole In One (Or Two!) game was always a favorite. As were the yodeling mountain climber and Plinko. The latter is a little random, but if someone can figure out ways to hack “Press Your Luck” and “Jeopardy!” then you’d think by now someone would have calculated the exact spot to drop a Plinko chip for maximum effect.

The king of all “Price is Right” games, though, is Golden Road. It’s not the funnest game, but it’s the one they use to give away a high-end sports car. When you see Golden Road, you know something big is about to go down.

• Assuming the COVID situation doesn’t turn south before then, Ole Miss plays Baylor in the Sugar Bowl on Saturday night, and LSU is in the Texas Bowl vs. Kansas State on Tuesday. Maybe they can help salvage a dismal bowl season showing for the SEC so far.

If it just means more, maybe it’s time to act like it.