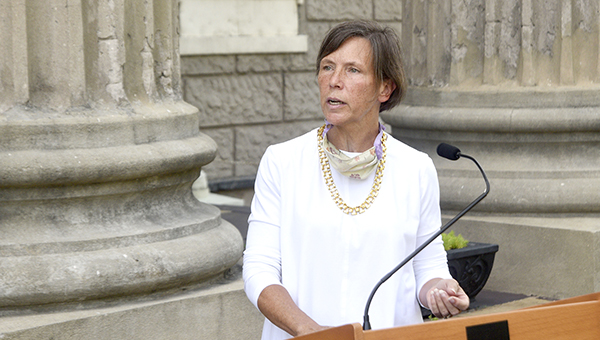 District 5 Supervisor Kelle Barfield was elected President of the Warren County Board of Supervisors during the board’s meeting on Monday morning.

“I’m pleased to have the additional opportunity to serve folks with this added layer of the role,” Barfield said. “As a reminder, all five of us serve the entire county. The office of the president really just means you’re authorized, when the full board allows you to, to sign things when needed and to run things with Robert’s Rules of Order.”

District 3 Supervisor Shawn Jackson nominated herself for the position of board president and voted in favor of herself. As the outgoing board vice president, Jackson said she felt she should succeed Holland as president during the discussion about the vote.

“The protocol is that the vice president would be the president,” Jackson said. “We also discussed, when we began our term, that each of us would take turns. So why would the vice president not ascend to president, at least in some fashion of getting back on track with what we agreed to?”

Following the discussion about the vote for president, the board voted to elect Holland as board vice president for the upcoming year.

“I really appreciate the opportunity to serve you for another year, and I take it very seriously,” O’Keefe said.

Correction: An earlier version of this story stated that Barfield was elected board president in a 3-2 vote with Banks voting for Jackson. However, Banks did not voice a vote, which automatically counts as a “yes” vote according to board protocol.