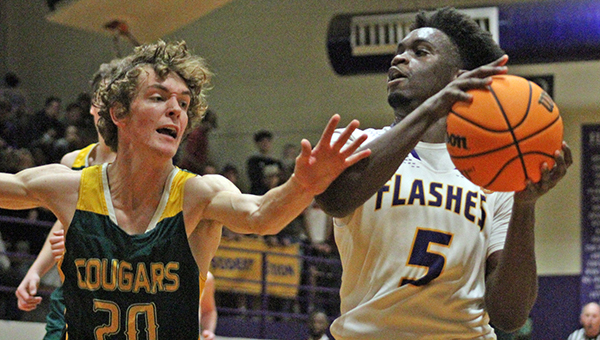 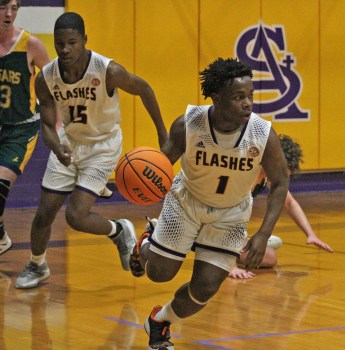 St. Aloysius' Padre Gray (1) brings the ball up the floor Tuesday against Central Hinds. Gray scored a game-high 31 points to lead the Flashes to a 66-47 victory. (Ernest Bowker/The Vicksburg Post) 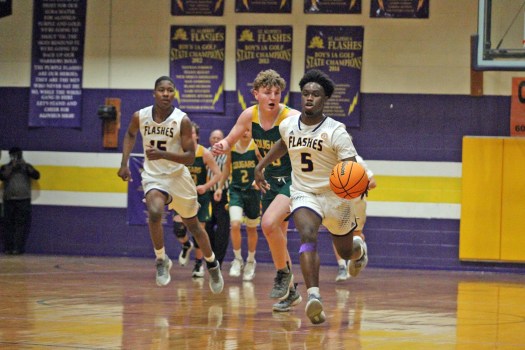 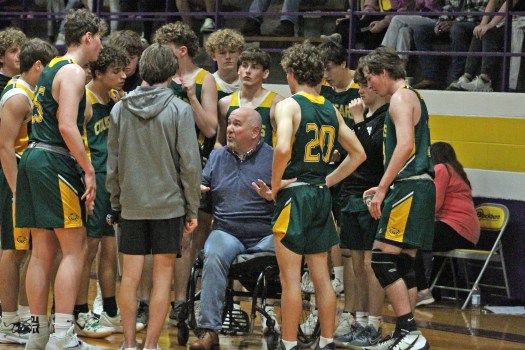 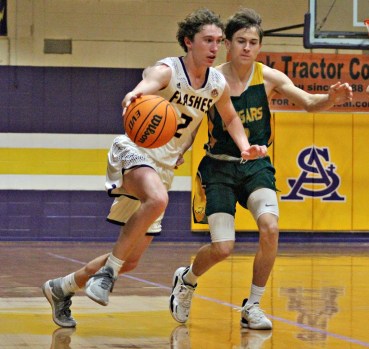 The St. Aloysius Flashes fell behind early Tuesday against Central Hinds. They didn’t stay there long.

St. Al stormed back from an early 10-point deficit, took the lead midway through the second quarter, and blew the game open in the third quarter on its way to a 66-47 victory.

Padre Gray made six 3-pointers and scored a game-high 31 points for St. Al (8-7, 2-1 MAIS District 3-5A), which began a stretch in which eight of its last 10 regular-season games are within the district.

“It’s big as far as district-wise. Our goal for the new year was to win district. We feel like we have a legitimate chance to win district,” St. Al coach Anthony Lumpkin said. “And this game was personal, too. They beat us in the summer and there was a lot of trash-talking in between. We made it personal, and they played like it.”

From then on, however, it was almost all St. Al. The Flashes overtook Central Hinds on a basket by Ahmed Stewart with six minutes left in the second quarter, taking a 19-18 lead, and led 27-22 at halftime.

Then, in the third quarter, they put the hammer down.

St. Al held the Cougars without a field goal for the last four minutes of the third quarter and finished on a 13-3 run. The five-point halftime lead swelled to 18, and the Flashes were never challenged again.

Central Hinds coach Chris Etheridge said his team’s meltdown was a combination of things, from an injury to senior leader Hagen Coumbe to foul trouble and even the lingering effects of several cases of COVID from the holiday break.

“I think they exploited some weaknesses,” said Etheridge, who also battled COVID in December. “(Lazaveon Sylvester) and (Gray) are nice players. The (Matthew) Pitre kid was a presence in the lane for them. I think that they made some adjustments and we chose not to. We’re still learning.”

Sylvester provided a spark for St. Al, with nine of his 14 points coming in the fourth quarter to help keep the Cougars at bay. Stewart finished with nine points, with eight coming in the first half.

“It was awesome. It had a lot to do with Lazaveon getting in the game. He brings a different type of energy that we need and the kids feed off of him,” Lumpkin said. “With the combination of us getting stops, and then him bringing the energy in, was the turnaround.”

Girls
Central Hinds 67, St. Aloysius 24
Mackenzie Hankins made seven 3-pointers and finished with a game-high 30 points to lead Central Hinds past St. Aloysius in the girls’ half of Tuesday’s basketball doubleheader.

Madyson Maw added 14 points for Central Hinds, which led 25-2 after one quarter. Hankins scored 16 of her points in the opening period.

Clinton 55, Warren Central 30
Zion Harvey had nine points and six assists, but Warren Central (12-7) hit a speed bump in its 2022 debut by losing to Clinton.

Kenijha Flowers led Clinton (10-5) with 18 points, Arianna Durrell scored 16, and Taelar Felton added 14. The Arrows raced to a 30-12 lead at halftime and extended it to 23 points early in the third quarter.

Warren Central went on a 13-2 run to get as close as 35-27, but Flowers hit a 3-pointer for Clinton to turn the momentum back the other way. The Arrows answered Warren Central’s run with a 17-2 surge of their own and were not threatened again.

Warren Central lost for only the second time in its last eight games. It will begin its Region 6-6A schedule Friday with a road game at Pearl.