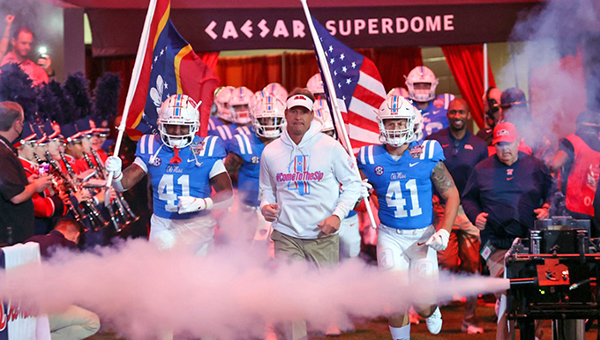 Ole Miss head coach Lane Kiffin leads his team out of the tunnel before the Sugar Bowl against Baylor. (Joshua McCoy/Ole Miss Athletics)

Reaching the Sugar Bowl was a memorable accomplishment for Ole Miss’ football program. It also offered a glimpse of the challenges ahead as the Rebels turn the page from the 2021 to 2022 seasons.

A number of key players put on an Ole Miss uniform for the last time, and several assistant coaches are or could soon be leaving for other jobs.

Worst of all, the Rebels lost. Al Walcott set a Sugar Bowl record with a 96-yard interception return, and sixth-ranked Baylor scored two touchdowns in the fourth quarter to beat No. 8 Ole Miss 21-7 on New Year’s Night in New Orleans.

It all took some of the shine off a 10-win regular season for Ole Miss (10-3), rather than serving as the crown jewel of a remarkable year.

“I’m not going to sit up here and talk about our miraculous season,” Ole Miss head coach Lane Kiffin said. “We did some neat things, special things, some great memories. But we didn’t finish it, and that’s what we came here to do, not just to get a participation trophy. So not real excited.”

Ole Miss’ bad night — and perhaps its transition toward the next phase of Kiffin’s tenure — started early against Baylor.

Quarterback Matt Corral, a dual-threat star QB and projected high-round NFL draft choice, was sacked from behind on the Rebels’ final offensive play of the first quarter and suffered a lower leg injury.

Corral is projected as a potential first-round pick in this year’s NFL draft. He eventually returned to the sideline on crutches, but did not come back into the game. Kiffin said Corral’s injury did not appear to be one that will affect his long-term prospects.

“His X-ray was negative. He just wasn’t able to go,” Kiffin said.

Without Corral, the Rebels turned the offense over to Luke Altmyer. The true freshman was sacked seven times — Corral was sacked three times before he was hurt — and finished 15-of-28 passing for 174 yards and one touchdown. He threw two interceptions, one of which was returned for a touchdown and the other set up Baylor’s final touchdown.

“That’s a very difficult situation for any backup quarterback, especially a freshman, to go into in a Sugar Bowl versus a really good defense. It’s not like we were lighting it up before he went in. We were struggling before,” Kiffin said. “I don’t think we did a great job game-planning. I thought they did a great job, and I thought it showed up. They outcoached us today on that side of the ball.”

Ole Miss did not have any players opt out of the Sugar Bowl, but that hardly means its roster will remain intact for 2022. Corral is one of a host of players who have announced plans to enter the NFL draft or are leaving for other reasons.

Running back Jerrion Ealy, who scored 26 touchdowns in three seasons and led the team in rushing in 2021, announced Sunday that he was leaving school early to turn pro. Fellow running back Snoop Conner, who had 668 rushing yards and a team-high 13 touchdowns, did the same on Wednesday.

Offensive lineman Ben Brown, a Vicksburg native who started 40 consecutive games before suffering a season-ending arm injury in October, has also declared for the draft.

Kiffin said before the Sugar Bowl that Charlie Weis Jr. will replace Lebby as offensive coordinator.

“When you win like we did, and have an historic regular season, people come and want a piece of what you are doing. So that’s happened. We lost a couple the year before,” Kiffin said.

Defensive coordinator D.J. Durkin is also drawing interest after improving an Ole Miss defense that ranked among the country’s worst in 2020. Reports surfaced Wednesday that Texas A&M was set to hire Durkin as its defensive coordinator.

Durkin’s defense helped the Rebels stay in the game against Baylor while the offense struggled. Baylor rushed for 279 yards, but did not score a point on offense through three quarters. One of its touchdowns in the fourth quarter came on a drive that started at the Ole Miss 15-yard line following Altmyer’s second interception.

Ole Miss had a chance to take the lead when Cole Nation lined up for a 35-yard field goal early in the fourth quarter, but his kick missed wide right.

“The way our defense played tonight, DJ has probably got a lot of opportunities. He’s done a great job all season. I don’t know of any other opportunities or anything. But he’s done a fabulous job with our players, not just performance, but recruiting and flipping over a roster that statistically over the last five years of defense here, was as bad as anybody in the country,” Kiffin said. “He’s done a great job, along with the other coaches, with flipping the roster over to play like they did tonight and like they did most of the season.”