LSU turns the page with blowout loss in Texas Bowl 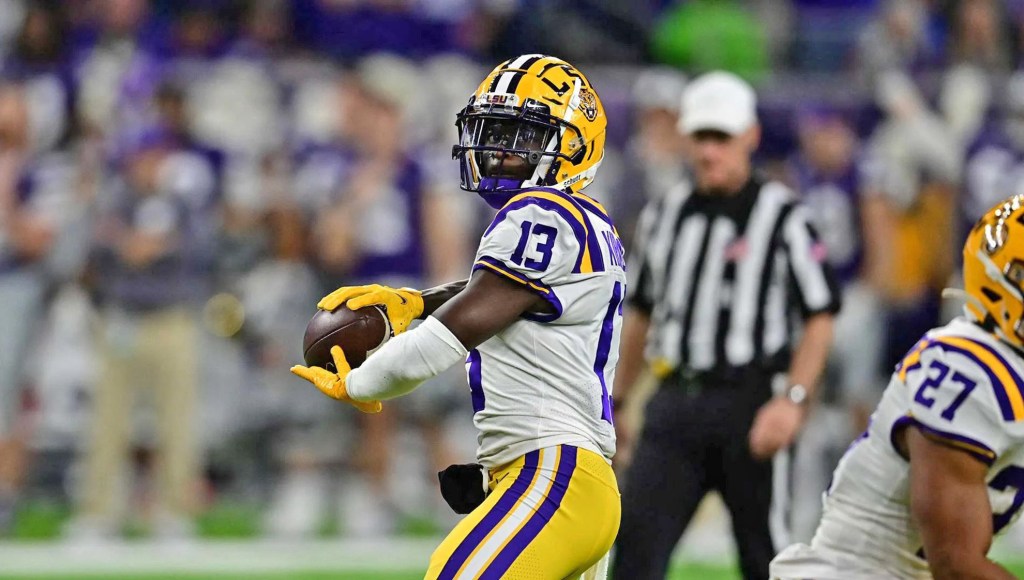 LSU quarterback Jontre Kirklin throws a pass during the Texas Bowl against Kansas State. Kirklin, a converted wide receiver, played for the Tigers because their top three quarterbacks were unavailable. (LSU Athletics)

HOUSTON — Depleted and hopelessly outmanned, with a first-time quarterback taking snaps and a new coach waiting in the wings, LSU closed the book on one era and turned toward another Tuesday night.

Deuce Vaughn rushed for 146 yards on 21 carries and scored four touchdowns — three rushing and one receiving — as Kansas State soundly defeated LSU 42-20 in the Texas Bowl.

Davis said LSU had just 38 scholarship players available for the game, but backing out was never an option.

“We don’t stand back from a challenge,” Davis said. “There was never a thought in our mind about not playing this game. We fully expected to win.”

Among the missing regulars was nearly every quarterback on the roster.

Starter Max Johnson transferred to Texas A&M and backup Myles Brennan is recovering from surgery. Third-string freshman Garrett Nussmeier would have had to burn his redshirt to play — a waiver from the NCAA was denied — so LSU entered the game with a big question mark under center.

The Tigers turned to senior receiver Jontre Kirklin, who hadn’t played quarterback since high school in 2016. Kirklin had only played in 25 games over five seasons, including his first two years as a cornerback.

“There wasn’t anybody else,” Davis said. “In regards to the conversation, our mantra has been next man up. We’ve dealt with so many things: Opt-outs, transfers, COVID, injuries. We’ve had so many guys who have had to step up, so he was one of many. I knew the moment the opportunity presented itself, he would jump at it, and he gave everything he had to help us.”

While Kirklin accepted the challenge, he was overwhelmed by Kansas State’s defense.

The Tigers didn’t get a first down until late in the second quarter. By that time, Kansas State already had 12 first downs and a 21-0 lead. LSU later scored on that drive, though, a 23-yard touchdown catch by Jaray Jenkins.

Kirklin was 7-of-11 passing for 138 yards, three touchdowns and two interceptions while also rushing for 61 yards on 11 carries. He delivered an 81-yard touchdown pass to Chris Hilton Jr. as time expired.

“Obviously, quarterback is not his natural position, and so there were mistakes that were made today. As a coach, we should have put him in a better position so those mistakes weren’t made, but in terms of the heart and effort that he gave, I couldn’t ask for anything more,” Davis said.

Kansas State (8-5), meanwhile, got a strong performance from its quarterback Skylar Thompson. He returned to make his final collegiate start after missing the regular-season finale with an ankle injury.

“For him to be on point like he was and throwing strikes, he was phenomenal,” Kansas State coach Chris Klieman said. “To see him go out like that was huge. He wanted to play well in this moment and he did.”

The Texas Bowl served as a sad epilogue to the Ed Orgeron era at LSU. The Tigers won the 2019 championship but fell far from that high the past two years. Nearly half the roster was unavailable Tuesday because of transfers, opt-outs or COVID, and it led to the biggest bowl loss in school history.

Kelly will take over from here and try to build the Tigers back into a contender. The promise of a bright future was certainly in Davis’ mind afterward, and he said everyone in the program needs to use this ending as fuel to get there.

The future at LSU is extremely bright. I can promise you this. Regardless of the scenario, the kids that we have at LSU, they love LSU. It means something for them to put on that jersey every day, and we’re going to continue to fight until the end,” Davis said.

“Coach Kelly is going to take these kids to new heights. I think these guys have a well-deserved break coming to them, and they’re going to come back inspired,” he added. “My message to the team following the game was to remember this feeling, allow it to drive you to do better. When we start winter conditioning and start spring practice, I want this feeling to completely drive our players to give more, to be more, and to never feel like this ever again.”