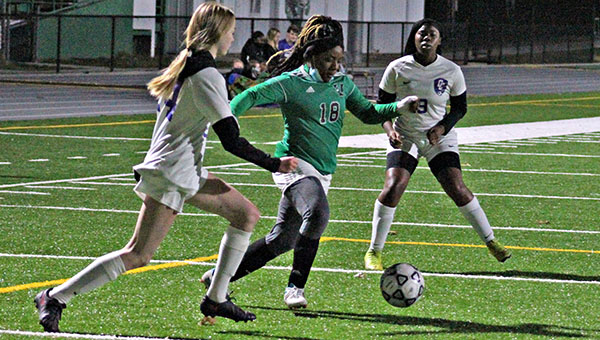 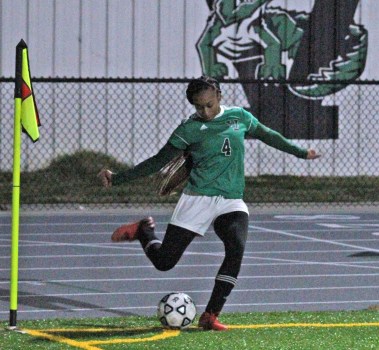 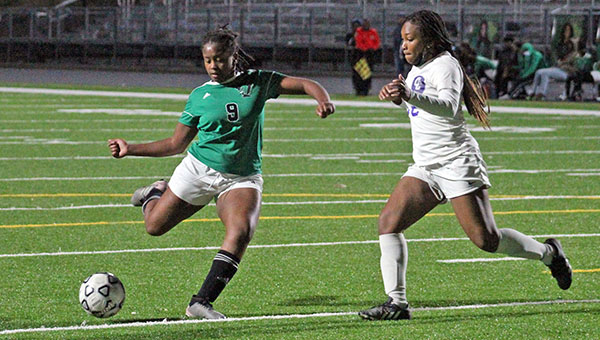 Vicksburg's Trinity McGloster (9) takes a shot on goal in the second half of Friday's game against Cleveland Central. McGloster scored a goal earlier in the half to help Vicksburg to a 2-0 victory. (Ernest Bowker/The Vicksburg Post)

With no seniors and only a handful of juniors on the roster, the best days are likely still ahead for Vicksburg High’s girls’ soccer team.

That hardly means they can’t win a bit and have some fun now.

Trinity McGloster and Amari Johnson each scored a goal in the second half, and the Missy Gators beat Cleveland Central 2-0 on Friday to win the MHSAA Region 3-5A championship.

“It feels great. I knew we were going to do it this year,” McGloster said. “We kind of started off rough, but we were picking it up through the season and I knew we were going to get together — and we got together and won district.”
It’s the third consecutive region title for Vicksburg (6-10-1, 4-1 Region 3-5A), which will have a couple of weeks to rest up and prepare for its playoff opener at Memorial Stadium.

The Missy Gators will host the second-place team from Region 1-5A — either Saltillo or Lake Cormorant — on Jan. 25. They have three games before then, including a back-to-back set early next week at Natchez and home vs. Provine on Monday and Tuesday. The final regular-season game is Jan. 18 at McLaurin.

Right now, the Missy Gators are surging. Friday’s win was their third in a row and fourth in five games. The first go-round with Cleveland Central (6-7-1, 1-2) in mid-December resulted in a VHS win in a penalty kick shootout. This one was scoreless at halftime, but controlled throughout by the Missy Gators.

Johnson finally broke the deadlock by arching a 20-yard shot past the keeper in the 46th minute.

Then, in the 57th minute, McGloster was fouled just outside the top left corner of the box. She sailed the ensuing free kick over the outstretched hands of the keeper for a 2-0 lead that turned out to be insurmountable.

Other than one or two rushes, Cleveland Central never mounted any offense down the stretch.

“Most of the time the ball was on our end,” Bailey said. “We figured out in Cleveland that they were playing a sweeper, so we worked with that knowing how we wanted to get past that by utilizing our footwork and who needed to be where. That helped. Tonight we definiely dominated the game from the beginning.”

After the final whistle, the Missy Gators smiled, hugged, and posed for a team picture in a moment of positivity and hope. Now the work begins to end a playoff losing streak that stretches back to 2009.
McGloster thinks it’ll happen.

“We finally got the team chemistry together, and once the chemistry bonded together we were there,” McGloster said. “I believe we’re going past the first round. Maybe the second round, too. I think we’re going far this year.”