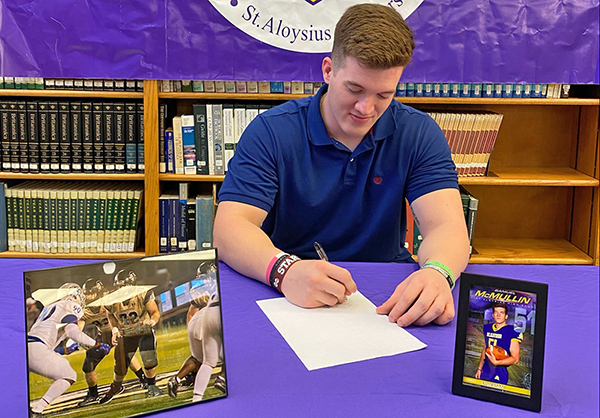 Sam McMullin was enjoying Thanksgiving with his family in the mountains of East Tennessee when he looked around and thought how nice it would be to stick around a while longer.

Somehow, somewhere, someone must have heard him.

“The day we left, I said, ‘Man, it’d be awesome to come play football in Tennessee,” McMullin said. “Sure enough, I get home and look at my Twitter — I never get on Twitter ­— and I had a message request. It was the recruiting coordinator from Carson-Newman asking me to give him a call.”

McMullin called, and soon after was having his wish granted. The former St. Aloysius football standout was offered a scholarship with Carson-Newman, a traditional NCAA Division II powerhouse located in Jefferson City, Tennessee.

He celebrated with a ceremony in St. Al’s library on Friday and planned to sign when he arrived on campus Saturday.

McMullin will be a mid-year enrollee with three years of eligibility remaining.

“I’m just really excited for the opportunity to go up there and meet all new people, and honestly just have school paid for while being able to play the sport that I love, and being able to be around people that love to do the sam things that I do,” he said. “Nothing gets better than that.”

McMullin, an offensive lineman, has played two seasons of junior college football — one at Jones College, and the other at East Central Community College.

He started the 2021 season opener as East Central’s right tackle but sprained his ankle in the first half and missed several games.

“I had a great time at East Central. It just sucked whenever I got hurt and wasn’t playing. That was the worst part about it. It was just one of those things you have to get over,” McMullin said.

He said he wasn’t sure how Carson-Newman found him — he didn’t have any contact with them until he received that fateful Twitter message — but was happy they did.

Carson-Newman finished 1-9 in 2021 and played a limited 2020 schedule because of the COVID-19 pandemic, but is one of the most tradition-rich programs in all of Division II. The Eagles have five national championships and five more runner-up finishes on their resume.

They reached the second round of the 2019 Division II playoffs. Including the 2021 season, Carson-Newman has only finished below .500 three times since 1980.

“I missed a lot of games. Personally, I wasn’t happy with my film. But I’m still getting on with an extremely good program at an extremely good school that, if God wants me to, I can take it to the next level,” McMullin said.

McMullin thanked his position coaches at Jones and East Central, and said two others at Carson-Newman swayed his decision to go there.

Offensive line coach Jay Guillermo was on Clemson’s 2016 national championship team, and strength coach Johnny Long worked at the University of Tennessee for more than 20 years.

“I have two extremely good coaches that I’m going in under,” McMullin said.

McMullin added that he plans to make all of his coaches, from all of his various stops, proud.

“I plan on coming in there and being the best I can, and being a leader if possible,” he said. “My understanding is that I’m coming in as one of the older guys. Hopefully I go there during the spring and everything works out.”