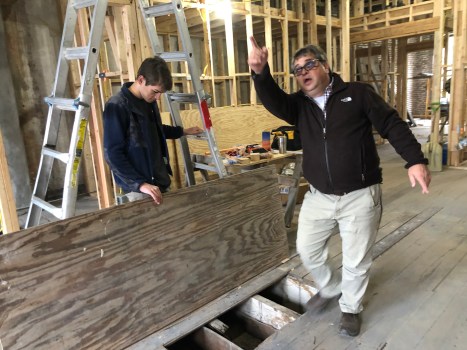 Bryan Pratt, right, and his son Cameron display the hole in the floor where a cannonball supposedly crashed through during the Civil War. (Photo by Anna Guizerix | The Vicksburg Post) 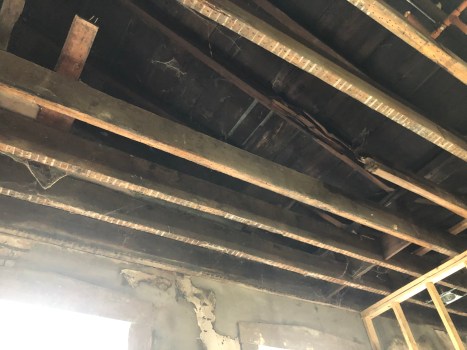 This portion of the ceiling of a building in downtown Vicksburg under renovation by Bryan Pratt shows a beam that was splintered by a cannonball during the Civil War. (Photo by Anna Guizerix | The Vicksburg Post) 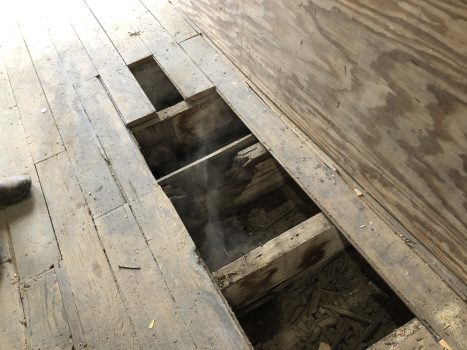 Nearly 160 years ago, a cannonball came crashing through a retail building in downtown Vicksburg — a fate that struck many buildings during the Siege.

The damage it left behind was recently discovered by Bryan Pratt and his sons while they were working on renovating the building, located at what is now known as 1207 Washington St.

The building, which has long been vacant, was once a dry goods store and later on served as the home of the Teller Coffee Company. Pratt has been working for nearly three years to restore the building and maintain its historic status, but it wasn’t until three months ago that he and his sons discovered the telltale signs of cannonball damage hiding beneath patched plaster in the second-floor ceiling. Instead of covering up the signs of war, Pratt said he intends to showcase this unique part of the building’s history.

“We’re preserving this damage. There’s about a two-foot section of this beam that’s missing, and you can see where it was patched,” Pratt said. “Something came through the ceiling right here, but we never saw any damage in the floor. Then, we started fixing the floor.

“Whatever it was came through the roof and took the top off of this beam and the bottom off of the beam next to it. It had to come at an angle, from the river.”

In order to preserve the long-splintered beam in the ceiling, Pratt said he plans to install a frosted glass shadow box that can be illuminated for tenants or guests to view the entry point of the cannonball. On the floor, he plans to install plexiglass over the jagged edges of the building’s original tongue-in-groove hardwood floors to showcase the second-floor exit point of the cannonball.

By his estimation, Pratt said the cannonball itself should be downstairs, wedged eight to 10 feet beneath the floor, which has long been covered with concrete. Since the Siege of Vicksburg in 1863, the building has seen many businesses come through its doors. However, Pratt said it’s still unclear what the ca. 1830 building was used for leading up to the Civil War.

“We do know that it’s been a grocery store and at the turn of the century, it was a coffee roastery,” he said. “We also know in the early-to-mid-1900s when you look in the phone book, there was an electrical engineer that had an office upstairs here. It’s also been a restaurant at one point.”

Pratt said he’s planning on a mixed commercial use for the building, with office space on the first floor and a residential apartment on the second floor. Some telltale signs of the building’s past life include remnants of the Teller Coffee Company’s smokestack used in the roasting process and a fireplace mantle that has Pratt’s great-grandmother’s name carved into it: Angelina Morrissey.

“Either she was a graffiti artist, or somebody had the hots for her, I’m not sure,” he joked. “But either way, we’re preserving that and plan to put the mantle back in this space.”

Pratt and his sons are also working to restore the bricks, plaster and finishes in the building to the way it historically looked. In addition to the cannonball damage, the Pratts have also discovered labeled whiskey bottles from the Prohibition era. In addition to the Siege, the building also survived the 1953 tornado and multiple fires that struck the downtown area.