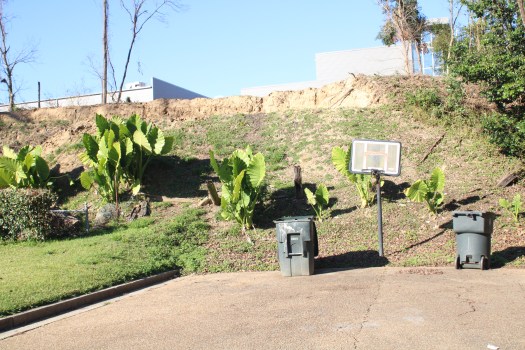 A large trench covers the top of a hill at the north end of Eisenhower Drive. The hill at one time had trees and a path students used to go to school, resident Karen Frederick said. The trees were removed while AOI was being built. The trench was dug after the school was built. (Photo by John Surratt) 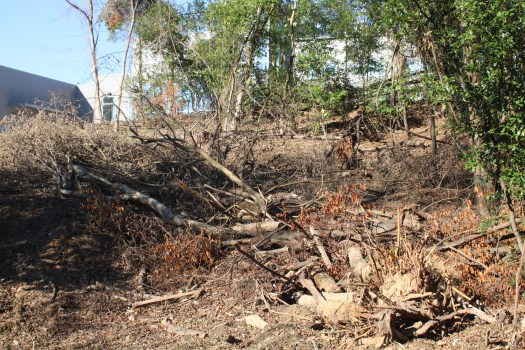 Tree trunks, trees, limbs and other debris lay in piles near the north corner of Karen Frederick's property. The debris has collected at the base of the hill since the Academy of Innovation was built. (Photo by John Surratt)

When the Vicksburg Warren School District’s new Academy of Innovation building opened at mid-term in January 2021, the school was hailed as a model school featuring open classrooms and state-of-the-art facilities to teach programs like science technology engineering, or STEM, programs.

However, the project left an old-fashioned problem that has some residents living on the north end of Eisenhower Street, which is adjacent to the school, frustrated.

Karen Frederick, one of the residents whose home is adjacent to the school property, said since the school has been completed, she and her neighbor have had a problem with debris in the form of trees, tree limbs, branches and other vegetation falling and threatening to come on their property.

“There is a tree threatening my house,” she said.

She pointed to an area in the corner near her backyard containing parts of trees, stumps and limbs that have fallen down a slope on the school property against her fence.

When she moved into her house in 2006, Frederick said, “This area was wooded and well-kept.”

A hilly section of the property between her home and her neighbor’s across the street had trees.

“This area had a store and people lived all around (the AOI site). That hill had a pathway that children would use to go to school,” she said. “This school property had a lot of history.”

Now, she said, the hill is clear of trees with a trench cut at the top of the hill.

Frederick said she and the neighbors thought the trench was made by school district workers to approach the remaining wooded areas to remove trees threatening homes. School maintenance officials, she said, told them it was built to enable contractors to do the work.

Frederick and her neighbor are beginning to get some relief. Bosk and Bower Tree Service, a contractor hired by the school district to clean the area, has begun working in the area. A crew from the contractor has cut most of a nearby tree down, removing the threat to Fredrick’s home, but has not removed the debris from the AOI property.

“They are working on the other side of the street,” she said. “I’m not sure what their plan is.”

The contractor, Frederick said is continuing its efforts.

“They’re still working; they haven’t stopped at all,” she said. “They keep going, so evidently they have a plan.”