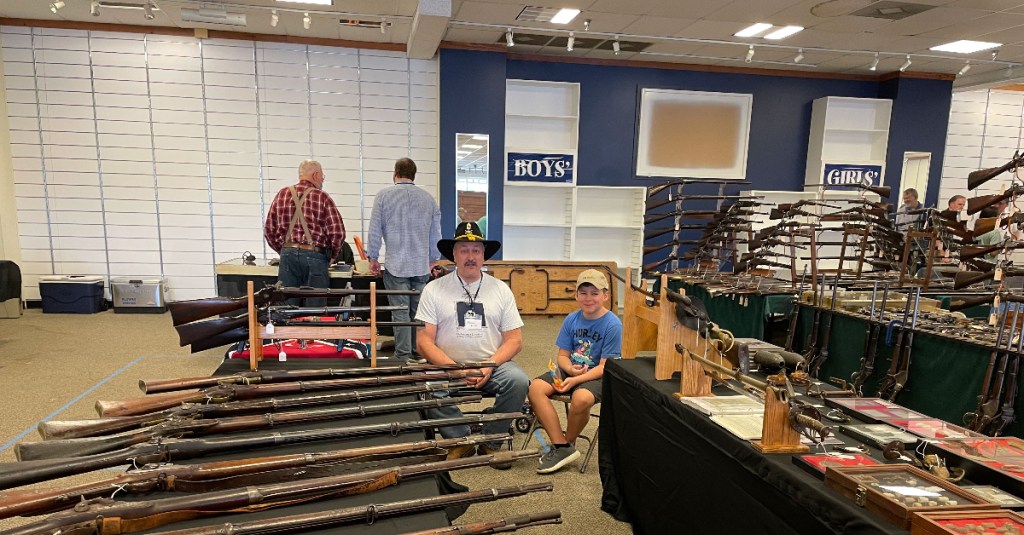 The Vicksburg Civil War Show brings enthusiasts of all ages to the River City to view, purchase and trade Civil War relics and artifacts. (Photo submitted)

This past year, he opened the Vicksburg Civil War Museum, which houses his massive collection of Civil War artifacts. And now, for the third year, he will be hosting the Civil War/ Old West Relic Show.

The event draws people from across the country with one man traveling 1,200 miles to the last show, Pendleton said.

“It’s really grown,” Pendleton said, of the show. “This year, we are expecting about 125 (vendor) tables.”

Pendleton said he began hosting the event after he learned there was no longer going to be one held in Vicksburg.

“There was a couple of guys here who were already doing them (Civil War artifact shows), but they didn’t really advertise, and it was a really small show — about 20 or 30 tables,” he said.

Pendleton said he had no desire at that time to host an event, but he did ask the two men if he could be involved and help promote the show.

“They said ‘no,’ because they were not going to do it anymore, so I took it up and just started doing it,” he said.

Pendleton, who is African-American, said he is “the only Black man in the world” to host a Civil War show. At his museum, located at 1123 Washington St., much of the focus is on the role of African-Americans in the Civil War.

And with a goal of wanting people to learn and embrace history, Pendleton said, all artifacts that will be on display or for sale at the Civil War/Old West Relic Show will be authentic “dug (from the ground) and undug.”

From his collection, Pendleton said, he will have on display a collection of guns made by Louis Hoffman.

“He was a Confederate gun-maker and had owned a hardware store here,” Pendleton said.

The story Pendleton said he heard about Hoffman was that he had been captured by the Union army and had agreed to be a gun maker for them. After the war, Pendleton said, he reopened his hardware store, got back on his feet and “made a lot of money.”

“I have a rifle that he made, and I’ve got a Derringer that he made,” Pendleton said, as well as having gun holsters made by Hoffman.

In addition to some of Pendleton’s collection, the Civil War show will also include vendors with guns, swords, cannonballs, artillery shells, belt buckles and Confederate and Union soldier uniforms.

During the event, Rafael Eledge will also be in attendance.

Eledge is one of the stars of “Antiques Roadshow,’” Pendleton said, adding, “He (Eledge) is the largest and most well-known Civil War artifact dealer in the country.”

Pendleton said the show will be held in the space that housed the old Gap store, owned by the late Margaret Gilmer.

“She attended the show last year and was looking forward to it this year,” Pendleton said.

Due to Gilmer’s untimely death, Pendleton said, he would be doing something to honor her.

For those interested in becoming a vendor, the cost is $75 and space is limited. Admission to the show is $10 and free for ages 10 and younger. Concessions will be available.

Pendleton said attendees who have found Civil War artifacts are welcome to bring them in to sell.

For more information about the show or to become a vendor, call 601-218-5526, email cpendle@att.net or visit bevysaurus.wixsite.com/vicksburgshow.