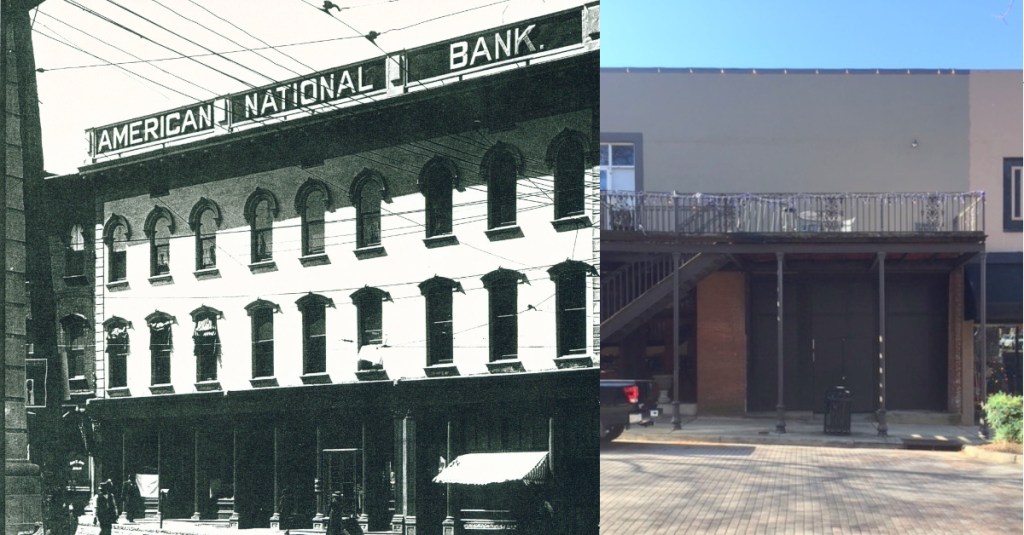 This week’s column features more information about the building on the southwest corner of Washington and Clay streets.

In the 1870s, the banking operations were at the back of the first floor with a jewelry store (Ben Guider’s by 1871) on the Washington Street side of the building. Insurance offices and lodges operated from the second and third stories. In 1874, William Fairchild Insurance and W.B. Pittman and A.B. Pittman, attorneys at law occupied the building, as did the Knights of Honor beginning in 1879.

The Vicksburg Herald reported on July 13, 1884, that “it is a melancholy fact that business in this classic city of the hills is dull, not to say dead. This fact was proven yesterday to the evident satisfaction of all by the crowd of men and boys who were constantly congregated about the big safe of the Vicksburg safe deposit company, which is being placed in position in the Vicksburg Bank building. The crowd varied in numbers from 15 to 200, and all apparently enjoyed to the fullest the successful endeavors of the gang of men employed to move the colossal safe.”

A day later, the paper reported that the “elegant fire and burglar-proof safe was opened for inspection today. It is a most perfect piece of mechanism and artistically finished. The bolts, locks, hinges are all nickel-plated. There are 90 tills 5×5 inches square, 16 inches deep and 10 double tills. Each till lock has an escutcheon guard or protection plate which is locked; the key remains in the hands of Mr. James P. Roach, the Secretary.

“Each till has an inside lock to which the renter only has a key.  The outer doors are air-tight. The time locks are double Dexters, each one having 2 million changes. The safe cost the factory $4,000, freight $135, handling from the depot and placing in position $125, and for the privilege of moving through Mr. Guider’s store $50 was paid.”

In February 1902, the Vicksburg Bank became the American National Bank of Vicksburg, organized with a capital of $100,000 and which assumed the sash and available assets of the Vicksburg Bank. In 1906, the American Bank announced that they would be occupying the entire first floor of the corner storefront and that Mr. Guider would be moving across the street.

The building would be “remodeled and refitted principally of marble, and will be as elegant as any in the South.”

At this time, the second and third floors were the offices of Mississippi Home Insurance, Dabney and McCabe Attorneys, Dr. B.B. Martin, Drs. R and P.J. O’Leary and the K and P Hall. By 1911, the upper floors were just lodge halls.  By 1935, the American Bank was no longer in the building and the first floor was occupied by United Shoe Rebuilders with the Boy Scouts on the second floor. The second storefront, 1302 (see the current photograph), housed Gray and Birchett Druggists from about 1866 to 1872 when it became Gray Druggists. In 1886, Merchants Bank moved into 1302.  They too, installed a new burglar and fire-proof safe.

“This safe was built by the standard safe builders, Diebold Safe and Lock Company, of Canton, Ohio. It is 56 inches high, 36 inches wide, 24 inches deep, weighs 6,000 pounds. The entire body of the burglar-proof safe is constructed of carbonized and decarbonized drill proof steel, three inches thick on top, bottom, back, front and sides, and put together upon Diebold Safe and Lock company’s patent plan. All the corners of the body of the safe are bent solid and there are no joints to wedge or burst open. This safe is protected against the powerful explosive known as dynamite, which has become dangerous material in the hands of burglars.”

In April 1899, Merchants Bank moved across the street to the Piazza Botto Building and 1302 was sold by Elizabeth Klein to Bettie Willis for $20,000. To be continued next week.

OUR OPINION: Give to someone in need this Christmas

SURRATT: So why not a bowl for Vicksburg?