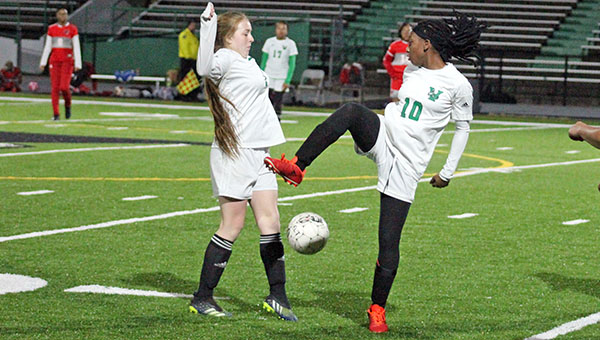 It took a little while for the Vicksburg Missy Gators to find their range and their scoring touch Tuesday night. Once they did, there was no stopping them.

Vicksburg only scored once in the first 24 minutes, then racked up seven goals in the next 26 minutes before the game was halted by the mercy rule.

“We took a lot of shots on goal, but we were just trying to let it roll in,” Vicksburg coach Samantha Bailey said. “I think overall we went out with that mentality that we couldn’t be beat — which is good, except we played to their speed that first half. Finally we kicked it into gear that last little bit.”

The Missy Gators clinched the MHSAA Region 3-5A championship last week, and were never in danger of being upset by winless Provine. The Lady Rams only pushed the ball across midfield a couple of times.

The Missy Gators just couldn’t score in the early going. They had a dozen shots that went just high or wide of the net, or were kicked right at the keeper for an easy save. The only one that went in came off the foot of McGloster in the seventh minute, and was dropped by the keeper before it rolled over the goal line.

The floodgates finally opened in the latter stages of the first half. McGloster headed in a long pass from Mullins for the first of three goals in the last 16 minutes before halftime. Alysha Murrell and Johnson also scored to give Vicksburg a 4-0 lead.

The Missy Gators then brought a quick end to the game by scoring four times in the first 10 minutes of the second half. Johnson and Mullins scored twice each and the whistle blew at exactly the 50-minute mark to bring an end to the rout.
Mullins had four assists in addition to her pair of goals.

“At halftime we talked about how we were playing a little too cocky, and that was getting the best of us,” Bailey said. “Yeah, we should win this game, but right now it’s not what it should be so it’s time to get serious out there. And they did.”

Vicksburg has one more playoff tune-up, on Jan. 18 at McLaurin. It will open the MHSAA Class 5A playoffs on Jan. 25. Bailey said Tuesday’s game was a good opportunity to have some fun and give some lesser-used players some experience.

“It gave me time to put in some people who don’t play as much so they got some game experience. I have a couple that are injured, so it gave them time to rest. I could sprinkle them in and out, so that’s good,” Bailey said.

Warren Central 1, Terry 0
Gloria Hall scored the game’s only goal in the ninth minute, and Warren Central’s defense made it stand up as the Lady Vikes secured a crucial region win over Terry on Tuesday.

Warren Central and Pearl will play each other Jan. 21 at Viking Stadium. Pearl won the first meeting 1-0 in November, so Warren Central would need to win the rematch by at least two goals — or have some other tiebreakers go in its favor — to earn Region 5-6A’s second and final playoff berth.

In Tuesday’s boys’ game, Warren Central beat Terry 3-0 for its fourth win in a row.