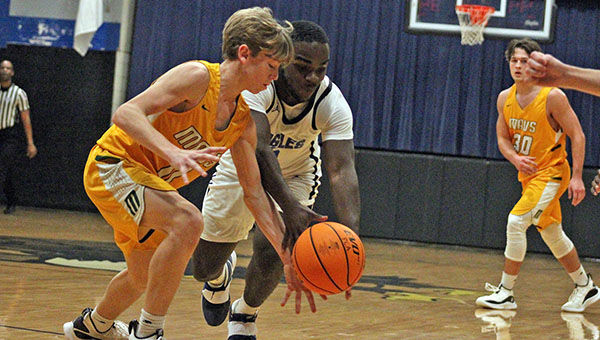 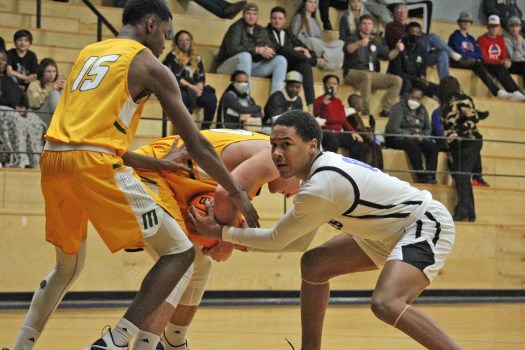 Porter's Chapel Academy's Nic Williams, right, gets into a tie-up with a Manchester Academy player for possession of a rebounds during Tuesday's game. (Ernest Bowker/The Vicksburg Post) 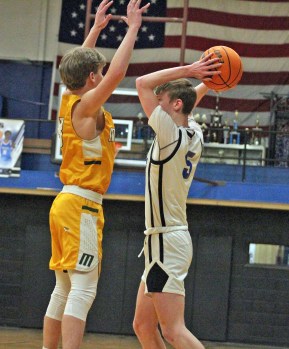 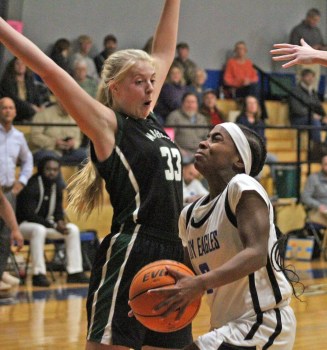 Eight years ago, when it won the MAIS Class 1A championship, Porter’s Chapel Academy’s boys’ basketball team had the motto, “Know your role.”

On Tuesday night, the Eagles brought it back.

“They have to hang around under the goal, and if our scorers can beat their guys one-on-one they should be open. They need to be ready to catch the ball and score, and they did that at the end,” PCA coach Walter Hallberg said of Washington and Rogers. “Those guys, I love them, because they know they’re here to play defense, rebound, and score when the opportunity comes. They enjoy playing because they know what they’re good at and they do it.”

Porter’s Chapel (12-7. 6-1 MAIS District 3-3A) led by as many as 18 points early in the fourth quarter. Manchester’s Rashad Bass and Tobias McGee each hit a pair of 3-pointers, however, and Jake White contributed a conventional three-point play to key a 14-2 run that got the Mavericks back in it.

“They hit all those 3s. We got a little lax on defense and turned the ball over too many times right there in the middle of the fourth quarter,” Hallberg said.

After McGee’s 3-pointer cut it to 41-35 with 3:13 remaining, Rogers and Washington went to work. Washington converted a three-point play with 3:03 to go and Rogers put in a rebound basket a minute later to help reignite the Eagles.

With a minute left and PCA ahead 46-40, Rogers also had a block that turned into a transition basket for Lawson Selby to push the lead back to eight.

Manchester missed its last four shots down the stretch and Chris Taylor made two free throws with 14.3 seconds left for the final margin.

Rogers finished with six points and nine rebounds, while Washington had five points — all in the fourth quarter — and four rebounds.

“We try to get better and better at it. Better at boxing out,” Rogers said of PCA’s inside game. “We’re kind of small. But if Chris and Lawson make the big shots, that’s what matters to us.”

Taylor had a game-high 18 points and seven steals, while Selby and Nic Williams finished with nine points each for PCA. The Eagles won for the eighth time in nine games and will go on the road Thursday night to play District 3-3A leader Greenville Christian.

Greenville Christian is the defending MAIS Class 3A champion and beat PCA in December. Rogers said it’ll be a tough game, but believes the Eagles are on track for a special season in the long run.

Girls
Manchester 71, Porter’s Chapel 43
Karley Martin scored 25 points and Lizzy Carpenter added 21 to lead Manchester Academy to a big win over Porter’s Chapel (15-5, 3-3 MAIS District 3-3A) in the girls’ half of Tuesday’s doubleheader.

Carpenter hit six 3-pointers in the game and was one of four Manchester players to score in double figures. Along with Martin. Sydney Porter scored 13 points and Presley Trammel had 10.

Manchester built a 22-point lead at halftime and was never seriously threatened in the second half. 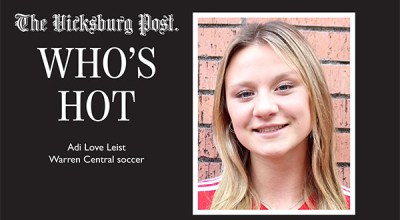