Mississippi State flies past Georgia with big second half 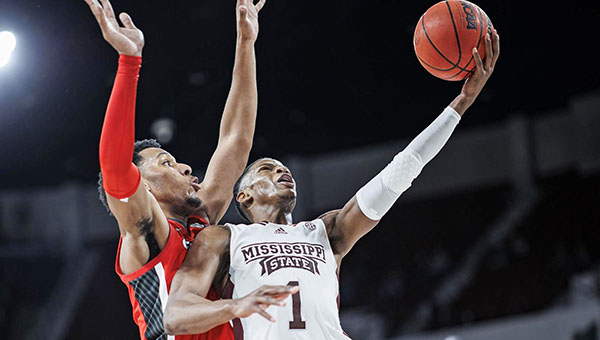 STARKVILLE (AP) — Mississippi State went into halftime Wednesday down by a point and looking for answers.

Iverson Molinar scored a career-high 28 points and Mississippi State quickly overtook Georgia in the second half, winning 88-72 on Wednesday.

Molinar was 11-of-18 shooting with seven assists. He had eight points and an assist during a decisive run down the stretch. Molinar’s layup with 2:44 to go put Mississippi State ahead 80-61.

Molinar also had just one turnover in 33 minutes of action.

“I have been working on my game for the longest,” Molinar said. “Only having one turnover and being able to score like that and actually having three rebounds, I feel good. I was able to make plays for others and make my things easier for my team on the offensive end and being aggressive.”

Javian Davis produced 18 productive minutes off the bench for Mississippi State, with 12 points, a team-high six rebounds and three blocks.

Mississippi State (11-4, 2-1 Southeastern Conference) shot 53 percent for the game despite the absence of Tolu Smith for the second straight game.

Smith, a 6-foot-11 forward who had eight double-doubles and led the SEC in rebounding last season, has played in only five games this season because of injuries.

“That should tell you how talented this team is,” Molinar said. “We’re missing a big piece down there and are still getting contributions. We still look comfortable out there playing for each other. And once we add that piece back, we’re even going to be scarier.”

Neither team led by more than six points in the first half when there were nine lead changes and four ties. Baumann’s layup with nine seconds left gave Georgia a 36-35 lead at the break. Mississippi State then built a 10-point lead over the first seven minutes of the second half.

Abdur-Rahim scored seven consecutive points midway through the half to cut lead to three, but Mississippi State responded with a 17-5 run capped by Shakeel Moore’s 3-pointer to go up 15. A few minutes later, Molinar scored six straight points and the lead was 19.