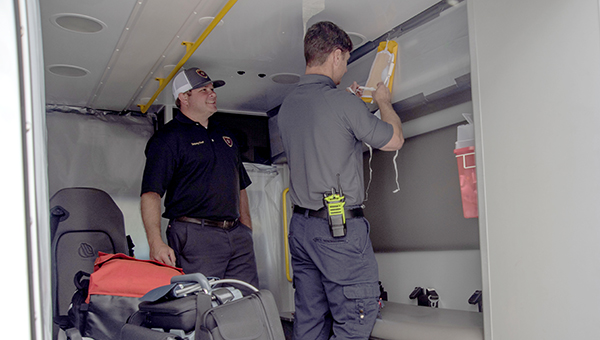 The Vicksburg Fire Department’s ambulance fleet is getting an upgrade.

Martin supervises the fire department’s emergency medical services. He said the ambulances are being prepared by Emergency Vehicle Services of Memphis, Tenn., which was the low bidder for the vehicles.

“We’re hoping for delivery by September of this year; they’re ordered and they’re in the building process now,” he said, adding the ambulances cost $207,633 each.

The vehicles will each be equipped with a Stryker Power-LOAD stretcher, which uses a battery-powered hydraulic system to raise and lower the cot holding the patient when medics are either loading or unloading an ambulance.

Martin said three of the fire department’s present four frontline ambulances are equipped with the stretchers. He said the new ambulances will also be equipped with a cool bar system where the air conditioning is placed at the front of the ambulance module, or box.

He said the fire department will equip and stock the ambulances when they arrive. The new stretchers will cost $21,277 each.

“A lot of people don’t realize the cost of the equipment that we carry on a run,” Martin said. “Last year we just purchased two new Lifepak 15 monitors to go in all these ambulances, and they run pretty close to $30,000 to $32,000 apiece.”

The fire department usually has 11 ambulances, Martin said. Presently, he said, it has nine because two ambulances were wrecked in 2021. When the new ambulances arrive, he said, it will put the fleet back at 11.

“We run four frontline ambulances and we five that we can put up on high call volume days or when additional calls come in,” he said.

One of the benefits of having the ambulance service operated through the fire department, Martin said, is “We have paramedics on fire trucks and we’re able to staff up nine different ambulances during high call volume periods and (call) spikes.

“Right now, if all of them (ambulances) are running, we can go nine deep,” he said. “We have paramedics and the staff to go. We have three paramedics and three EMTs in the administration staff also so that’s additional if it came to it and the call volume is needed.”

Parts of Martin Luther King Jr.’s speeches will be…