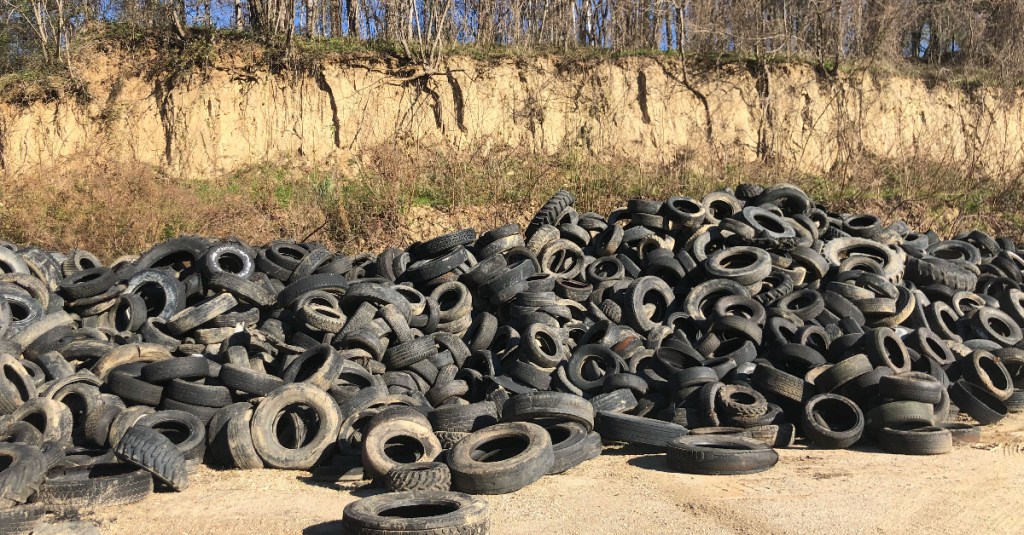 Warren County's tire disposal site is reaching capacity, but the Board of Supervisors is in talks to properly dispose of the tires through a company in Saltillo, Miss. (Photo by Anna Guizerix)

Warren County has a waste tire problem, but the Board of Supervisors is in talks to correct the issue.

Between the county’s tire collection facility on U.S. 61 North and sites on private properties that are threatening the right-of-way, there are thousands of tires stacked up with, it seems, nowhere to go. During Monday’s working session of the board of supervisors, Board Attorney Blake Teller presented the issue with the board, along with potential solutions.

“We do have an ordinance in place about illegal dumping and collection of waste. So, we do have some ways to police these collections of tires and other debris along our right-of-ways and in public places,” Teller said. “But the other issue that has been brought up is the fact that our own collection facility is so full, that we need some relief there as well.”

In addition to the county’s accumulation of tires through regular wear and tear on its vehicles, the tires collected at the annual Hazardous Waste Day event are also housed at the county’s tire disposal facility.

Teller said he had contacted two different tire disposal companies, one in Jackson and Liberty Tire Recycling in Saltillo.

“The Saltillo group, they’ve given us some options. They can bring containers or trailers for us to fill up, or they’ll come down and do it all,” Teller said. “There’s some cost involved, obviously. Best I can tell, it’ll run anywhere from $20,000 to $40,000 depending on how much you want to get rid of. If we wanted to get rid of all of them, it would obviously be on the higher end of that.”

Based on estimates from Teller and the county environmental officer, there are three trailer-loads of tires that need to be removed, and it’s a mix of tires for different uses. Including all fees and costs, as well as a 50 percent discount, the tire removal is expected to cost a total of $250 per ton.

“Reducing the pile at the yard is only a quarter of the problem. The bigger problem is the two particular locations I’ve brought to the board’s attention,” Herring said. “These guys are traveling to Jackson, going to tire shops and the shops are paying them to dispose of their tires. And their ‘disposal’ is to carry them back to their property and stack them as tall as this building.”

The individual stacking tires on Choctaw Ridge Road has been arrested at least once for the offense, Herring said. The tires, which number in the hundreds around a mobile home in a residential area, have been reported as rolling in roadways and causing hazards.

Herring also said he would like the county to research the practices of neighboring municipalities for waste tires, whether that be dumpster stations throughout the county or some other practice to limit the likelihood of tires and other waste items being improperly disposed of in Warren County.

Sending notice letters to property owners was suggested, and Teller pointed out that the board can charge property owners up to $20,000 for the disposal of waste tires, which would be a lien on their properties.