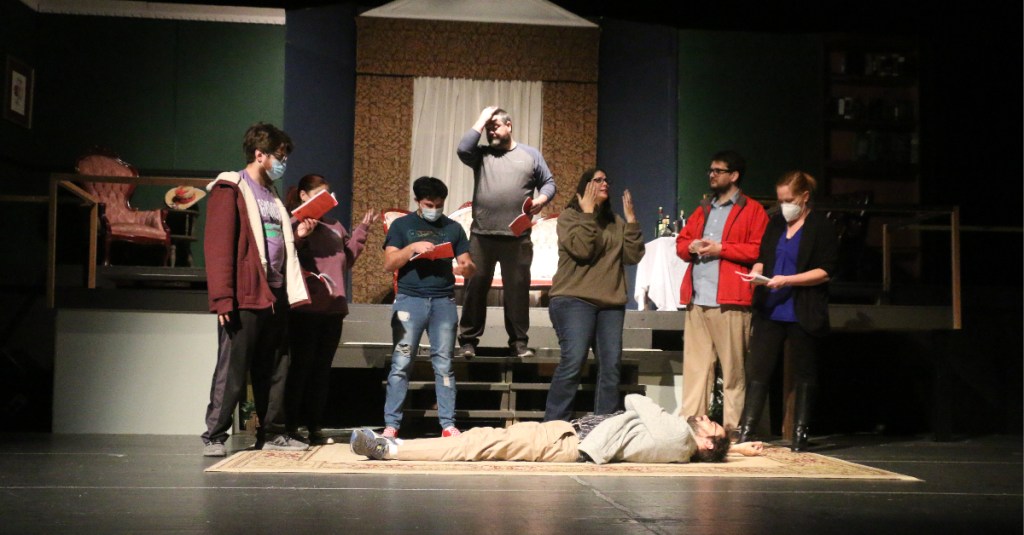 The cast of Vicksburg Theatre Guild’s “Clue” has been rehearsing since December. (Photo by Terri Cowart Frazier | The Vicksburg Post)

It’s time to put the thinking caps on.

The Vicksburg Theatre Guild’s upcoming performance is a whodunit, and audience members will need to pay attention to all the clues.

Based on the 1985 movie, which was inspired by the classic Hasbro board game, the VTG’s performance of “Clue” is sure to challenge the brightest detectives’ sleuthing skills all while offering up a hilarious evening of fun.

Sarah Goss, who is serving as the director of the show, said “’Clue,’ the movie, is considered one of the funniest movies ever made.”

And with the stage performance based on the movie, Goss said, theatergoers will be chuckling all the way through.

“It’s all so ridiculous,” Goss said. “Such a collection of characters. It’s nice to just sit back and laugh.”

Goss said she became interested in directing “Clue” after she had caught the movie on TV.

“It’s so funny, and I remember seeing it when I was younger,” she said. “I knew there was a musical, but I was looking for a fun, lighthearted play that people could laugh at. I was excited when I discovered there was a stage play version as well.”

Rehearsals for “Clue” kicked off in December and since then, the cast has been working not only on the performance but also on the set.

“Our cast is responsible for set construction and it’s big and complicated,” Goss said.

However, by building the set, it has allowed the cast to become comfortable in navigating it, sometimes in very low lighting, Goss said, which is needed with a performance that has “trap doors, hidden panels and all of those things needed for a good murder mystery.”

Nikki Ciciora is serving as the state manager for “Clue,” Goss said, which has been a “hectic” position in a fasted-paced production.

One of the elements of the production Goss said she thought audience members would enjoy is its nostalgia.

“There is a lot of nostalgia involved with this play. Many of us remember playing the game,” she said.

The cast of “Clue” is comprised of 17 actors and those performing in the VTG production are Andrew Cochran as Wadsworth the butler, Amy Crews as Yvette and Mary Claire Allison as the cook.

Those taking on the characters of the iconic board game suspects are Jason King as Col. Mustard; Cindy Veazey as Mrs. White; Lisa Hill as Mrs. Peacock; Hunter Weeks as Mr. Green; Ashleigh Holliday as Miss Scarlett and Larry Reaux as Professor Plum.

In addition to the sizable cast, Goss said, the production has an extensive stage and technical crew.