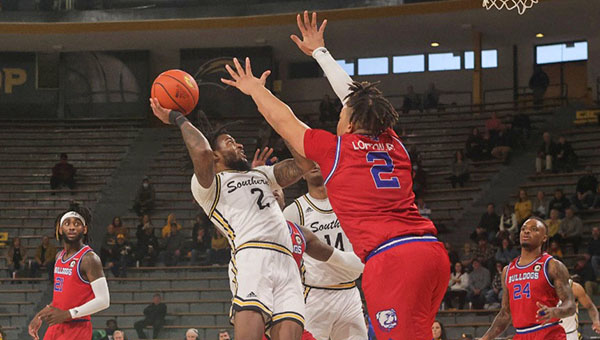 HATTIESBURG — Southern Miss finally played another home game on Sunday, but it did little to change the trajectory of an increasingly difficult season.

“We settled down after La. Tech’s hot start and they’re the league favorites, but we went tooth and nail with them,” Southern Miss coach Jay Ladner said. “I was proud of our guys, but there’s no moral victories, we’re here to win. There was certainly a lot of positives and this was anybody’s ballgame with three minutes left.”

Louisiana Tech won the first meeting between the teams on Thursday, 80-57 in Ruston. This one was much more competitive, even if the final score didn’t appear that way.

There were 11 ties and eight lead changes, and Louisiana Tech only led by two points with 6 1/2 minutes to go. Amorie Archibald scored five straight points to key a game-ending 11-2 run and the Bulldogs were able to pull away.

The Bulldogs made seven of their last eight field goal attempts. Defensively, they held the Golden Eagles to just two points — from a pair of free throws — in the final 3:51.

“It was a nip and tuck game for a long time, but I thought our group really executed beautifully down the stretch, especially on the offensive end. It gave us a little bit more cushion and we were able to close the game out here on the road,” Louisiana Tech coach Eric Konkol said.

DeAndre Pinckney finished with a career-high 21 points and 11 rebounds for Southern Miss. Tyler Stevenson also had a double-double, with 21 points and 10 rebounds, but no other USM player scored more than five points.

Southern Miss was playing its first home game since Dec. 14, and just the second since Thanksgiving. Three home games since then had been canceled or postponed. The Golden Eagles have lost nine of the 10 road games they’ve played in that span, but they’ll now have a couple of weeks to enjoy the comforts of home.

Sunday’s game was the first of four in a five-game stretch that will be played in Hattiesburg. Up next is a contest with Southeastern Baptist College, Wednesday at 7 p.m., that was an addition to the schedule.