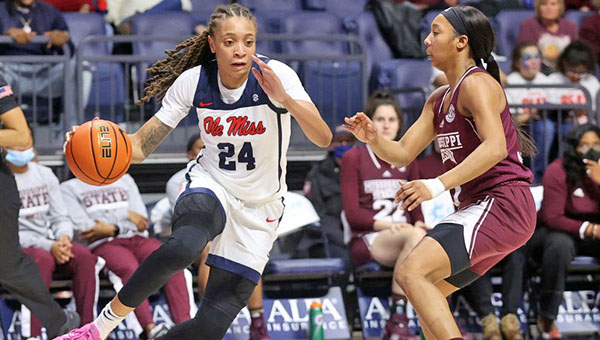 Ole Miss' Madison Scott (24) drives toward the lane Sunday against Mississippi State. Scott finished with 12 points as the Rebels cruised to an 86-71 win, their first over the Bulldogs since 2014. (Joshua McCoy/Ole Miss Athletics)

OXFORD — If there was any doubt about the balance of power shifting in women’s college basketball in Mississippi, Ole Miss silenced it.

Ole Miss (15-2, 3-1 Southeastern Conference) snapped a 14-game losing streak against its biggest rival, and beat the Bulldogs for the first time since 2014. Mississippi State had won 20 of the last 22 games against Ole Miss since 2008.

“It’s been a long time coming. But if you ever need motivation on having a dream, and putting in the work, and keeping your head down and just being an over-believer, just come and look at Ole Miss women’s basketball,” Ole Miss head coach Yolett McPhee-McCuin said. “We’ve been working and telling people this day would come. A lot of people believed, some didn’t. We wanted to make a statement today, and I thought we did.”

Ole Miss opened the game with a 12-0 run and never looked back. After Austin hit a jumper with 4:11 left in the first quarter to put the Rebels ahead 16-5, their lead never again dipped into single digits.

Ole Miss led 48-26 at halftime, and grew the margin to 32 by the end of the third quarter.

Half of Monk’s points came during the game-opening 12-0 run.

“We knew we had a size advantage over Mississippi State, so as you can see to start the game I was pounding it inside because I knew that was our advantage,” McPhee-McCuin said.

The Bulldogs finished the game with a 21-6 run to make the score a bit more respectable, but never came close to making it competitive.

“It wasn’t a lot of fun, but a great college environment, so you have to love rivalries,” Mississippi State coach Doug Novak said. “Again, it did not go our way at all. I was proud that we stayed in the fight in that fourth quarter to just keep on competing because the way we started that game was not good. But (it’s) a great rivalry. It’s fun to play in those environments and it’s misery to lose in them.”

Mississippi State’s winning streak over the Rebels coincided with the two programs reaching opposite ends of the spectrum. Mississippi State reached two Final Fours since its last loss in the series, while Ole Miss had five losing seasons in eight years.

McPhee-McCuin noted, half-jokingly, that this is only her fourth season in Oxford. She did not, however, deny that this was much more important than a run of the mill midseason SEC game.

The coach also said it won’t be the last time the Rebels beat their archrivals on her watch.