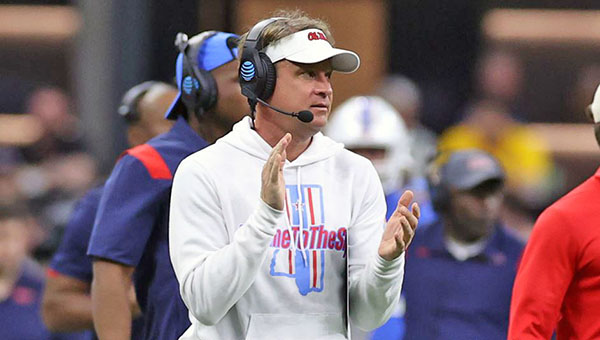 OXFORD — Ole Miss restocked its coaching staff on Tuesday by formally announcing a number of hires that had been in the works for weeks.

Ole Miss announced it has hired Charlie Weis Jr. as its co-offensive coordinator and quarterbacks coach, Chris Kiffin and Chris Partridge as co-defensive coordinators, as well as several other staff positions and promotions.

Longtime assistant coach Derrick Nix was promoted to assistant head coach, while Marquel Blackwell was hired as running backs coach and Nick Savage as the strength and conditioning coach.

“I’m excited about the direction of our program with these new hires and role changes,” head coach Lane Kiffin said in a statement. “The experience, familiarity and track record of success with these new coaches will only strengthen our staff chemistry and continuity. In addition, I look forward to seeing some of our current coaches take on increased leadership roles after helping us guide this team to record-breaking success in our first two seasons here.”

The hires of Weis and Chris Kiffin had previously been reported by a number of media outlets, but not formally announced. They’re replacing D.J. Durkin and Jeff Lebby, respectively.

Weis spent the past two seasons as South Florida’s offensive coordinator, and also worked with Lane Kiffin at Florida Atlantic.

Chris Kiffin, the head coach’s younger brother, returns to Ole Miss after a four-year stint in the NFL with both the San Francisco 49ers and Cleveland Browns. He was the Rebels’ defensive line coach and defensive recruiting coordinator from 2012 until 2016, but left after the NCAA’s investigation into recruiting violations committed by former head coach Hugh Freeze and his staff.

Blackwell was Houston’s running backs coach last season, and has also worked at West Virginia and Toledo in the past six years.

Nix, meanwhile, continued on as the veteran of the Ole Miss coaching staff. He spent 12 years as the Rebels’ running backs coach, shifted to wide receivers in 2020, and now will add assistant head coach to his resume.

Nix has earned a reputation as one of the country’s top recruiters during a 17-year career that has also had stops at his alma mater Southern Miss and with the NFL’s Atlanta Falcons.