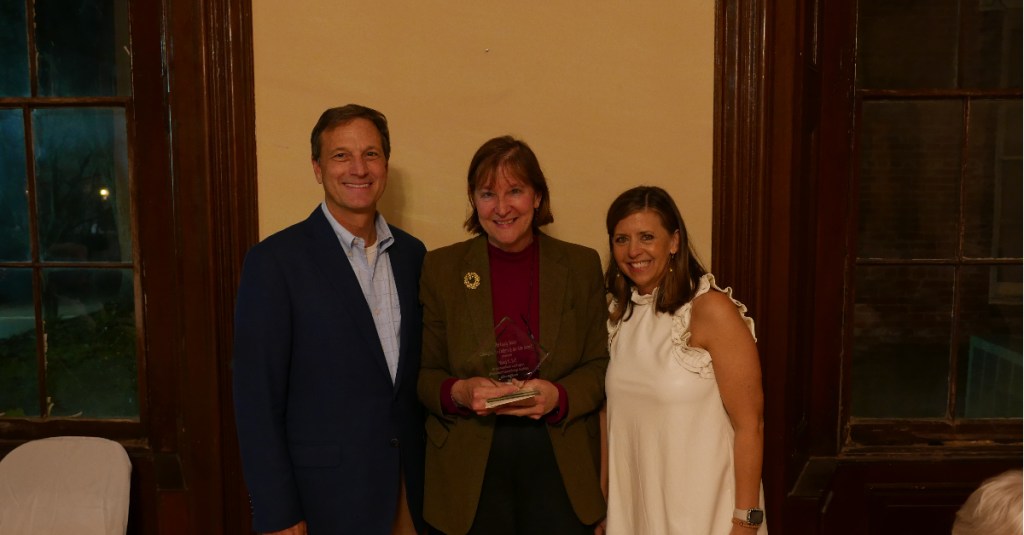 Blake Teller, Nancy Bell and Stacey Mahoney stand together as Bell was presented the 2021 The Landy Teller Champion for Culture & the Arts Award in December. (Photo by Mike Calnan)

The Landy Teller Champion for Culture & the Arts Award for 2021 was presented at the SCHF December board meeting and Christmas party. The recipient was Nancy Bell.

“Nancy Bell has a long history with SCHF. She negotiated with the Sisters of Mercy to purchase the block of buildings and optioned the property to give us enough time to find the funds to purchase,” SCHF Executive Director Stacey Mahoney said in a release. “Nancy agreed to personally take care of the upkeep on the property during this transition. She helped establish a committee to develop the property into the Southern Cultural Heritage Foundation (SCHF) and then worked with that committee to develop plans for the property. She has been a member of the SCHF Board of Directors since 1994, and president of the board for over 14 years.”

Bell has also helped with grant writing, rehab projects, fundraisers, membership and so much more. She has also been the director of the Vicksburg Foundation for Historic Preservation since 1983 and has been active in other community organizations as well.

“Landy Teller was a founding member of the Board of Directors of the Southern Cultural Heritage Foundation and in the early days when there were just a few of us who believed in the crazy notion that you could turn a block of buildings into a cultural center that could support itself, he was a rock,” Bell said. “He believed that it needed to be done and could be done and because his counsel was so well-respected, he was able to encourage those people who we needed in order to make the project a success, to get on board.

“Landy was always available to answer legal questions, to write contracts or provide whatever support he could to all of our directors,” she said. “He always had an encouraging word for our staff. We would not be where we are today without the leadership of Landy Teller.”