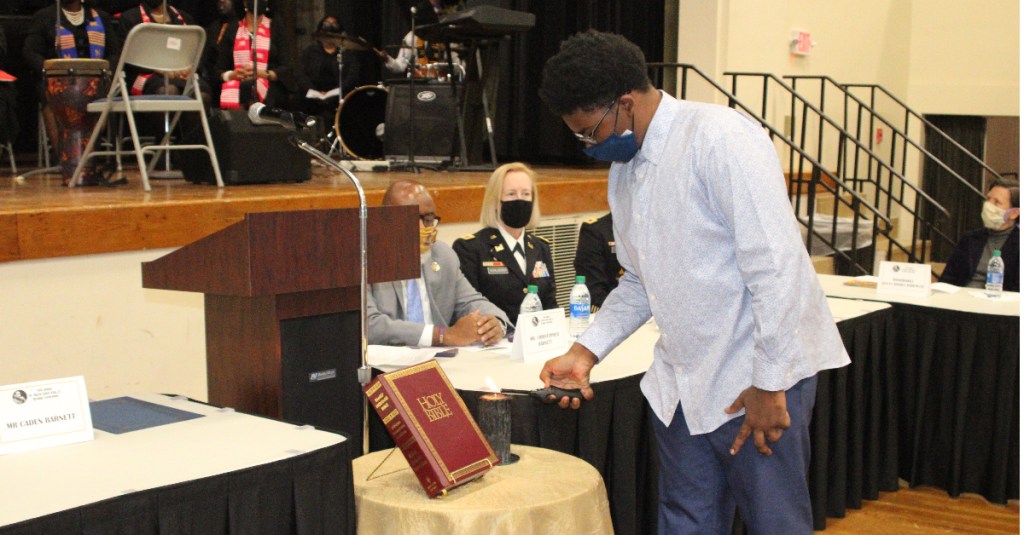 Caden Barnett, an eighth-grader at the Academy of Innovation and master of ceremonies for the Dr. Martin Luther King Jr. Birthday Memorial Celebration, lights a candle in memory of Dr. King at the start of the program. (Photo by John Surratt | The Vicksburg Post)

Monday’s program, presented by the Rev. Dr. Martin Luther King Birthday Memorial Committee focused on sections from three of King’s speeches — “Give Us the Ballot,” his May 17, 1957, speech on voting rights; a March 8, 1965 speech on non-violent protest; and “I’ve Been to the Mountain Top,” the April 3, 1968 speech he gave in Memphis, Tenn., the day before his assassination.

A song affiliated with each speech was sung by the Vicksburg Chapter NAACP Choir and preceded the speech.

Bobbie Bingham Morrow, NAACP president and memorial committee chairman, said the program was designed to remind the residents attending the memorial that much has not changed since King gave those speeches.

And the combination of song and King’s voice and words brought the message that more work is needed before King’s dreams and the resolutions he sought for the complex issues of the civil rights era are realized.

“We’re struggling with the same issues that Dr. King struggled with in the 50s and 60s,” she said. “We’re dealing with voting rights; not so much that they’re taking away our voting rights, but there are so many inhibitors. Now you have to stand in line for 20 hours and not give someone anything to eat (referring to a new Georgia election law) so we’ve got to think of remedies to get around those roadblocks to actually vote and make our vote count.

“Another is police brutality; there are so many issues that he died so we wouldn’t have to fight and here we are, we’re fighting. I’m not talking about physical fighting,” she said.

Instead, Bingham Morrow said, she would rather see people come together and debate issues to reach a solution, “and if there’s a war, all of us need to be fighting that war; we don’t need to fight each other. We can agree to disagree.”