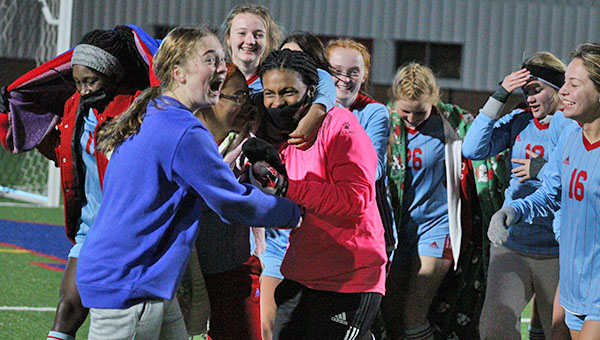 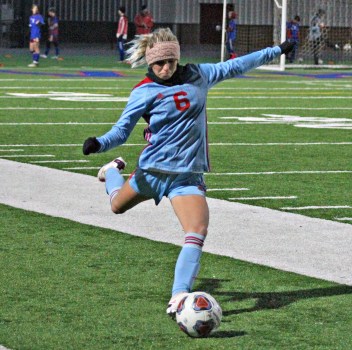 Warren Central's Maegan Little kicks the ball down the field in the second half of Friday's game against Pearl. (Ernest Bowker/The Vicksburg Post) 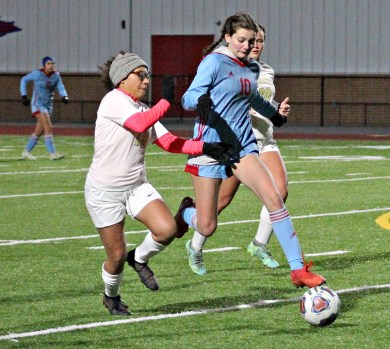 Warren Central's Gloria Hall (10) dribbles past a Pearl defender during Friday's game. Hall scored one of Warren Central's three goals in an overtime shootout to help her team to a 2-1 victory. (Ernest Bowker/The Vicksburg Post)

The Warren Central Lady Vikes walked off the field winners, with the kind of finish they’ll remember forver.

It wasn’t enough to keep their season alive, though.

Riley Martin scored the game-winning goal, and Anaya Holt made a key save in an overtime shootout as Warren Central defeated Pearl 2-1 on Friday.

Despite the win, Warren Central did not qualify for the MHSAA Class 6A girls soccer playoffs. A 2-1 loss to Pearl in November left the two teams tied for second place in Region 5-6A, and Pearl earned the league’s final playoff berth based off of a tiebreaker.

“I’m super proud of them. I didn’t really explain to them beforehand what was in front of us. I knew what we had to do to make sure that we went and elected not to tell them that,” Warren Central coach Jeremy Lawrence said. “I just basically said we’ve got to go out and do the best we can and put it to them. We played a good game. I’m extremely proud of the effort they put in, especially toward the end.”

Both teams settled in after that, with a couple of modest scoring chances that were easily saved by their opponent’s keeper and no real heartstopping moments. They played through another 30-plus minutes of regulation and 20 more of overtime until the final whistle blew and it went to a penalty kick shootout tied at 1.

“I looked at it as, I needed to try something different. We played a big possession build-up game and it just wasn’t working,” Lawrence said of the second half stalemate. “They knew it, they were ready for it, so toward the end I put Maegan (Little) up top and said let’s play it up to her. We’ve got to get some goals in and see if we can make it happen. So what happened was we naturally sat back and played the ball up to her so we didn’t concede anything while allowing her to be up there.”

Pearl converted its first two penalty kicks in the shootout, while Warren Central made one and missed one. Then Holt came up big down the stretch.

Gracie Lou Burkes hit the crossbar on Pearl’s third attempt, while Polk and Martin scored to give Warren Central a 3-2 lead in the shootout.

Holt then came up big with a save against Pearl’s fourth shooter to put the Lady Vikes in command. Melissa Herrle was stopped by Pearl’s keeper, but Jennifer Neal dribbled a soft shot wide left to end it.

“It’s kind of surreal,” said Holt, a senior who played keeper for the first time this season. She finished with 13 saves on Friday. “This is my first game having to do a PK shootout, so it’s nice being able to win a game off of PKs with it being my first time — and last.”

After an awkward moment as the officials double-checked the score, the whistle blew to award the Lady Vikes the victory. It was a bit bittersweet considering they won’t get to continue on into the playoffs, but not enough to fully take the smiles off of their faces.

“There’s a couple of things that just didn’t go our way. Especially when you look at the first Pearl game, I think we could have won that one just as easy as this one,” Lawrence said. “But other than that, I’m extremely proud of them. There’s only one game we dropped that I think we shouldn’t have lost. As a coach going into their first year, everybody learning a new system, adapting to a new style, they did well. They did very well. And I’m very excited for the future.”