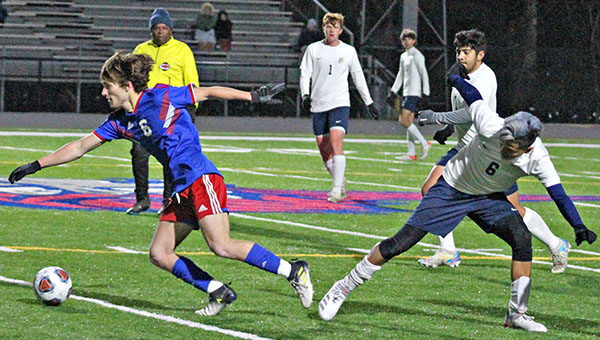 Warren Central's Tony King, left, gets past the defense of Pearl's Yossel Sanchez in the second half of Friday's game. (Ernest Bowker/The Vicksburg Post)

The last time Warren Central played a game, it had an impressive 9-2-1 record and was ranked in the top 10 in Mississippi high school boys soccer.

When it returned to the field 34 days later for the do-or-die regular-season finale against Pearl, it looked like none of those things.

With three injured starters out of the lineup and the others struggling to get their rhythm and speed back, the Vikings were overwhelmed. Pearl racked up three second-half goals and won 4-0 on Friday to earn a playoff berth and end Warren Central’s season.

“The whole month of January we played one game. We had five games canceled,” Warren Central coach Greg Head said. “I’ve never been in a situation like this. But I couldn’t control it. My school, my principal couldn’t control it. It’s not his fault. I hate it for the kids more than anything.”

Anthony Pocasange and Fischer Reed scored in a three-minute span early in the second half Friday as the Pirates turned a tight 1-0 game at halftime into a blowout. They added one more goal in the 71st minute.

Head said the second-half surge by the Pirates was a combination of his own team’s mistakes and the need to press for a goal. Head moved a couple of his defenders into attacking positions, which created better scoring opportunities for Pearl.

“We were changing the formation, trying to get more people up there, and made a couple mistakes in the back. It happens,” Head said.

Warren Central (11-4-1, 3-3) missed the playoffs for the third consecutive season. The first two times, it finished third in a stacked region that included perennial powers Madison Central and Clinton. This season, it was a steady stream of misfortune.

Warren Central won nine of its first 12 games, and wrapped up the first half of the schedule with a with a 3-0 win over Neville (La.) on Dec. 18.

A scheduled two-week holiday break wound up being stretched to more than a month, however, as five games were canceled because of COVID or other reasons.

The canceled games went into the books as forfeits for one side or another, but Friday’s game was the first one the Vikings had actually played in 2022. A COVID-related school shutdown from Jan. 14-18 also limited practice time over the past week, and crippled preparation for what amounted to a play-in game for the Class 6A playoffs.

Because of the various tiebreakers and the result of their first game — a 2-1 overtime shootout victory for WC in November — the winner of Friday’s contest would have claimed the No. 2 seed in Region 5-6A behind Northwest Rankin.

“They deserve better. They’re one of the better group of players that have come through here in my 15 years,” Head said. “When they get out here and are playing well I have to ask, ‘Is this my team?’ Because it’s one of the best teams as far as skills and working the ball up the field. There’s no telling how good we could have been if we’d kept everybody healthy and we didn’t have this COVID thing.”