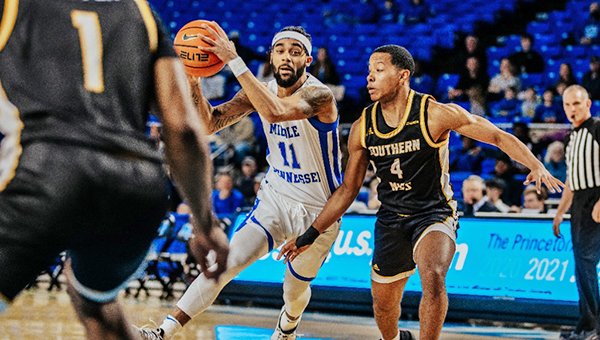 MURFREESBORO, Tenn. — Southern Miss was red hot in the first half Saturday and ice cold in the second.
It was not a winning combination.

Southern Miss shot 60.9 percent from the field in the first 20 minutes, and then only 36.4 percent in the second half. The swoon allowed Middle Tennessee to blow past the Golden Eagles and secure a 74-60 victory.

After trailing by as much as 12 points in the first half, the Blue Raiders (12-6, 3-2 Conference USA) cut it to three at the half. They then used a 21-4 run early in the second half to take the lead for good.

Middle Tennessee outscored Southern Miss 44-27 in the second half, as the Golden Eagles made just 8 of 22 shots from the field. They were 1-for-12 from 3-point range in the game, and missed all nine attempts in the second half.

The Golden Eagles also grabbed only two offensive rebounds in the game.

Tyler Stevenson had a double-double for Southern Miss (6-12, 1-4), with 20 points and 11 rebounds. Mo Arnold added 12 points and DeAndre Pinckney had nine.

“We started the game flat, we just didn’t look like ourselves the way we’ve been defending all year long, and it burned us in those first eight minutes,” Middle Tennessee coach Nick McDevitt said.

Johnny Brown made a 3-pointer with 11 seconds remaining to give Florida A&M (6-11, 4-2 Southwestern Athletic Conference) a 68-67 lead. Randolph added two free throws with three seconds left before the Rattlers fouled Oddyst Walker, who made one free throw and intentionally missed the second.

Alcorn lost its second game in a row after winning its first four SWAC games. Its last three games have been decided by a total of four points.

Bethune-Cookman used an 8-2 run in the last four minutes of the game to pull away after Jackson State cut it to 47-45 on a layup by Jonas James.

The Tigers never led after the 8:55 mark of the first half, but Bethune-Cookman’s lead never reached double digits, either.

Knight hit a jumper with 7:15 left in the game to snap a 48-all tie, and Shorter never trailed again. Knight also hit a 3-pointer with 3:27 to go that gave Shorter its biggest lead in the final stretch, 57-50.