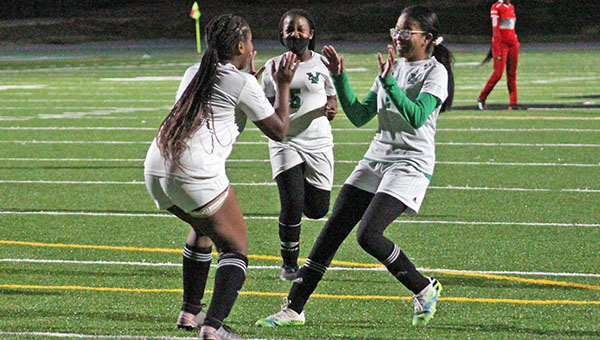 It’s been more than a decade since Vicksburg High last won a game in the MHSAA girls soccer playoffs. It only feels like it’s been that long since they’ve played at all.

The Missy Gators will take the field Monday for their MHSAA Class 5A playoff opener, at home against Saltillo. It’s only their third game of 2022, and the first since Jan. 11. They also went a week without practicing because of COVID-19 protocols.

The rust from the layoff is cause for concern, coach Samantha Bailey said, as the Missy Gators try to win their first postseason game since 2009.

“We’ve gone a long streak without games, but also without practice. They’re a little nervous, but I told them that it’s OK. Your skills aren’t going to go. We’re just going to get back out there and build communication back up,” Bailey said. “You tell them to be sure they’re running at home and touching the ball at home. You can tell them those things, but it’s just like telling them to study at home. I don’t know if they do or not.”

Vicksburg (7-10-1) earned the right to host Monday’s game by winning its third consecutive region championship. Regular-season success, however, has not translated into postseason glory.

The Missy Gators were shut out in each of their four playoff appearances since 2016, and outscored 27-0 in those games. This year’s team, Bailey said, is well aware of those struggles and has made it a primary goal to put them in the rearview mirror.

“Our whole goal this year was to go past the first round of the playoffs, because we’ve been here for three years and then we get beat,” Bailey said.

Bailey added that a playoff win would be a huge step for the overall health of the program. She took over as coach midway through the 2020-21 season and, despite getting the team into the playoffs, barely had enough players to finish the year.

The size of the roster has increased a bit this year, and there are no seniors and only two juniors. Several of the team’s top players such as Trinity McGloster, Kennedy Mullins, Alysha Murrell and Amari Johnson, are either eighth- or ninth-graders.

Giving those young players a taste of success could be a boost in the seasons to come, Bailey said.

“We’ve gotten stuck in the same spot for so many years. Last year I came in in the middle of the season and we played a lot of games with exactly 11 players. We started this year with 21 players and we’re down to 17,” Bailey said. “Seeing that growth in a year has been tremendous. If we can get past this first round I think that’s going to be huge for the program.”

The challenge, then, is getting past a Saltillo team that hasn’t played since Jan. 13 and slumped over the past month. The Tigers (12-5-1) won seven consecutive games and tied another during a hot streak in November and December, but are 3-4 since then. They’ve lost two of the three games they’ve played since New Year’s.

This is the first time Vicksburg and Saltillo have played each other, and they have few common opponents. From what information she has gathered, Bailey said it appears to be a good matchup for the Missy Gators from a tactical standpoint.

“They like to take the ball to the goal and not take long shots. So as long as we can get our midfield and our defense to attack and shut down, I think our goal is going to be pretty possessive back there,” Bailey said. “I think it’s going to be a good matchup. The formation we’ve been running is going to work well with Saltillo.”

Now they just need to shake off the rust and get back to work.

The Vicksburg Warren School District implemented a five-day COVID quarantine period from Jan. 14-18, and the Missy Gators stayed away for an extra day or two as a precaution. Their first practice after a weeklong layoff was Friday, and they planned two more over the weekend.

“(Friday) is the first day the girls are getting to take the field again. I’m a little nervous about that, but it makes me feel better that what we’ve been running will match up well with Saltillo,” Bailey said. “We have a long weekend ahead.”