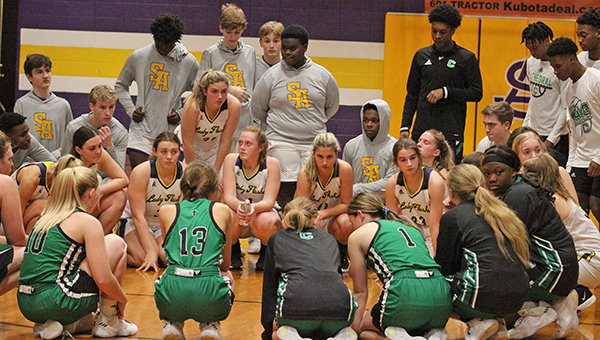 St. Aloysius and Cathedral basketball players gather at halfcourt for a prayer service between games of their girls-boys doubleheader on Tuesday. (Ernest Bowker/The Vicksburg Post)

Rivalries in sports are a strange and complex thing.

No matter what side you’re on, they’re often touted on the surface as Good vs. Evil, the Cool Kids vs. the Jerks, Us vs. Them, and so on. There are teams that you love to hate for a variety of reasons, but there can also be a lot of mutual respect for the skills and talents of each.

Sometimes, it boils down to a family feud. We might want to punch you on game day, but we’ll hug it out and go eat somewhere afterward. You can pick on each other, but when the tough times hit you’ve got each other’s back.

The latter description certainly applies to St. Aloysius and Cathedral. The two Catholic schools along the Mississippi River have endured a nearly century-old rivalry that once led a coach from one side to famously — and, I assume, only half-jokingly — describe the other bunch as “the scum of the earth.”

Because both schools are governed by the Catholic Diocese of Jackson, however, they are kin. That same century of sports hatred has bred plenty of friendships and a bond that runs much deeper than the final score.

That bond was on display Tuesday, when Cathedral’s basketball teams journeyed up Highway 61 from Natchez to play St. Al. Between the girls’ and boys’ games, members of all four varsity teams gathered at halfcourt to pray and share their grief.

On Jan. 11, St. Al alums Caroline Simrall Hood and Chandler Roesch were involved in car wreck. Simrall was killed and Roesch seriously injured. Both graduated from St. Al in 2018.

Three days later, Cathedral student Jordan Herrington was killed in another car wreck in Louisiana. Herrington, a 15-year-old sophomore, was a member of the football team.

During the prayer service, Rev. Rusty Vincent said a few words, and some of the players exchanged hugs. Everyone in the gym surely passed along a few prayers of their own for the families and friends of Simrall, Roesch and Herrington.

The service was brief, and the sound of bouncing basketballs and warmup music soon replaced the grieving silence. The gravity of the moment should be lasting, however.

When it comes right down to it, sports are a fun diversion for us all. No matter the result when the final buzzer sounds, life and time march on and bigger things await.

I doubt Simrall and Herrington knew each other, separated as they were by time, distance and a hundred other facts of life. But for one moment Tuesday they brought a gym full of people together to remind us all that in even the biggest rivalries we can take a moment here and there to share our humanity, our passion and our grief.