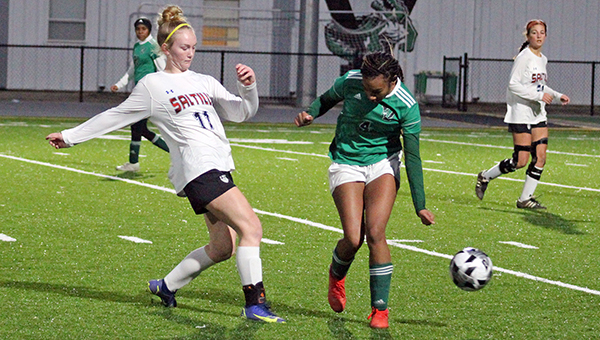 By the time a steady rain started falling over Memorial Stadium on Monday night, Vicksburg High had already been wrecked by a storm.

Saltillo scored six goals in the first half — two by AC Crouch — and knocked the Missy Gators out of the MHSAA Class 5A girls soccer playoffs with a 7-0 defeat.

“It’s always tough going out, but it’s really bad when you go out this way. When you know that that should not have been a 7-0 game,” Vicksburg coach Samantha Bailey said. “ That’s not a true representation of what our ladies can do.”

Caitlyn Carnathan and OJ Miller each had a goal and two assists for Saltillo (13-5-1), which advanced to face either Ridgeland or Neshoba Central in the second round. Ridgeland and Neshoba play each other Tuesday night.

The Lady Tigers scored their first five goals in a span of 14 minutes as a series of defensive breakdowns cost the Missy Gators (7-11-1).

Two goals came off of corner kicks, and two more dribbled into the net after VHS keeper Ava Pritchard got a piece of a shot but not enough to keep it from crossing the goal line. Pritchard did make four saves in the game.

The loss was a deflating one for the Missy Gators. They won the Region 3-5A championship for the third year in a row and had high hopes of snapping a seven-game playoff losing streak that dates back to 2010.

Instead, the game was over almost as soon as it got going. Goals by Covington in the seventh minute and Dickens in the 10th flipped the momentum squarely in Saltillo’s favor. The Missy Gators spent most of the first half playing in their own end and did not take a shot until the 29th minute.

“Saltillo and us could have been really well matched. The defense that fell apart, we battled that early in the season and we had overcome it,” Bailey said. “We went in today, thought we had a really good game plan, thought we had everybody where they needed to be, and then they just didn’t execute.”

Despite the rough finish, the season as a whole turned out to be a positive for the Missy Gators.

Bailey, in her first full season as coach, brought some stability and success to the program. They won a crucial late-season game against Cleveland Central to clinch the region championship, and gutted out an earlier overtime victory against their top competitor in the region as well.

Most importantly, the entire team is expected back next season. There are no seniors and only two juniors on the roster, so there is plenty of optimism that this can be a beginning rather than an ending.

“We’ve got everybody coming back. We’ll be back out working as soon as they let us,” Bailey said. “We learned a lot this season. That’s always a good takeaway, if you can at least learn a lot, then at least something came out of it.”