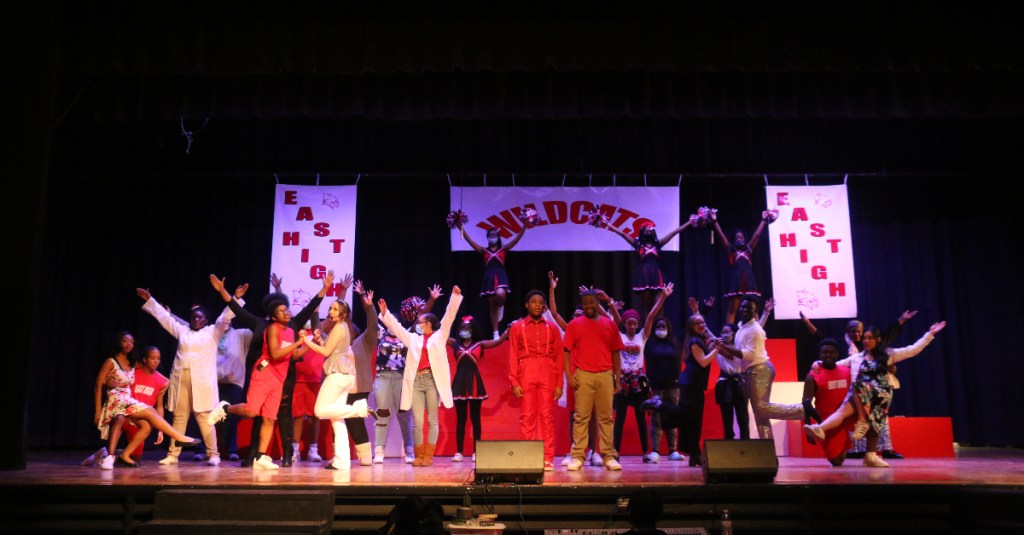 Students at Vicksburg High School practice Saturday for their upcoming performance of "High School Musical Jr." Performances will be held at the VHS auditorium at 7 p.m. Friday and Saturday night. Tickets are $8 and are available at the door or online. (Photo by Terri Cowart Frazier | The Vicksburg Post)

When brawn and brains collide, relationships can be rocky — but not if true love prevails.

And that it does in Vicksburg High School’s upcoming production of “High School Musical Jr.”

Based on the television film, which was released in 2006, VHS choral director Angela Chapin said, “High School Musical Jr.” is just a scaled-down version of the original, but with all the favorite songs folks are familiar with, including “We’re All in This Together” and “Get’Cha Head in the Game.”

Chapin said rehearsals for the musical began in November and the cast and crew, which including directors totals 60, were glad to get back on the stage.

“I’m really excited to perform again. Last year was not good for performers of any kind as we navigated through the newness of COVID and now that we have gotten a plan to combat it, we are able to get back to doing the things we love to do and that’s being on stage in some form or fashion,” she said.

This familiarity, Chapin said, is what she thinks the audience will enjoy most about the VHS production.

“Most people know “High School Musical” and that just always makes you feel like you are a part of it when you can sing along in your seat,” she said.

As for the performers, Chapin said she could not be prouder of her students.

“I am so proud of the kids. I brag on them every chance I get because they are just so amazing and have worked so hard. They have been very independent on getting a lot done prior to coming to rehearsals, and they are so talented and real go-getters,” she said.

The students are even taking on tasks typically done by Chapin — namely choreography.

“The choreography portion came about when my fellow choreographers and I, Lauren Kilroy and Jamair McGloster asked Mrs. Chapin if we could choreograph the show’s most popular number, ‘We’re All in This Together,’ and then thought it would be fun to choreograph the entire show and it took off from there,” VHS sophomore Jaiden McGloster said.

McGloster, who plays Chad in the musical, said in addition to pulling together dance moves for the production, being part of the cast has also stretched his “growth as a person.”

“I’ve been able to meet people, make new friends and build stronger relationships. I never would have thought that I would be doing something as amazing as this. It has truly been such an amazing experience,” he said.

Ariah Pendleton, a senior at VHS who is playing Gabriella in the production, said she too has experienced personal growth from performing on the stage.

“This musical is very meaningful to me. This is my last musical with VHS. So, this musical represents a lot of growth for me,” she said.

Prior to her lead role in “High School Musical Jr.,” Pendleton said, she also performed in the school’s productions of “Lion King Jr.” and “Frozen Jr.”

While funny and entertaining, Pendleton said “High School Musical Jr.” is also a production with an underlying message.

“I think the audience will learn that you don’t have to do or be what others want you to be. It all depends on you,” she said.

Performances of “High School Musical Jr.” will begin at 7 p.m. Friday and Saturday at the VHS auditorium, 3701 Drummond St.

Tickets are $8 and are available at the door or online at gofan.co/app/school/MS4765.

“I highly suggest people buy their tickets online, because we do have limited seating due to COVID regulations,” Chapin said.

Raffle tickets will also be sold the night of the performances. Items to be raffled include a basketball signed by the cast, High School Musical t-shirts and donations from community partners.