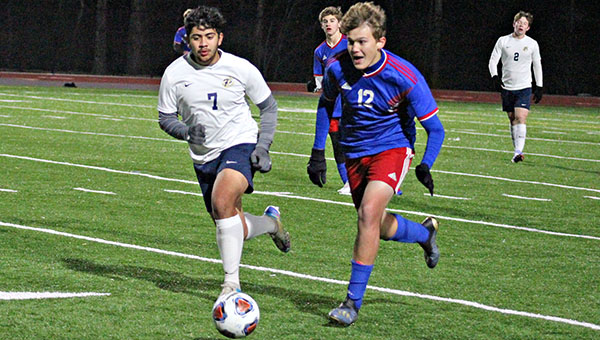 The team that won nine of its first 12 games was not the same one he was seeing in practice. Injuries had taken away several starters. A monthlong layoff robbed them of their momentum.

When they did take the field, Head’s fears were realized. The Vikings hung tough for a half, but eventually faltered. They gave up three second-half goals and had their season end with a 4-0 loss to Pearl in the regular-season finale.

“I hate it for the guys because they deserve better,” Head said. “This was our chance to make it to the playoffs for the first time in a long time. It hurts.”

Warren Central (11-4-1, 3-3 MHSAA Region 5-6A) finished tied with Pearl (9-6-3, 3-3) for second place in Region 5-6A and the teams split their two head-to-head meetings. Pearl, however, got the nod for the league’s second playoff berth — and a first-round matchup with Ocean Springs — based off of a goal differential tiebreaker.

Warren Central could have gotten in by winning Friday’s game, but instead will miss the Class 6A playoffs for the third straight year.

The first two times, it finished third in a stacked region that included perennial powers Madison Central and Clinton. This season, it was a steady stream of misfortune.

Warren Central had a 9-2-1 record after beating Neville (La.) 3-0 on Dec. 18. Then a scheduled two-week holiday break wound up being stretched to more than a month, as five games were canceled because of COVID or other reasons.

The canceled games went into the books as forfeits for one side or another. Friday’s game was the first one the Vikings played in 2022.

A COVID-related school shutdown from Jan. 14-18 also limited practice time over the past week, and crippled preparation for what amounted to a play-in game for the Class 6A playoffs.

“It just kills your momentum,” Head said. “It hurt that we had three starters out and didn’t have a lot of subs, but we haven’t done anything and they were all out of sync. I hate it for the kids, because these have been some of the best players to come through here.”

Head was not exaggerating about the abilities of his outgoing seniors. They compiled a 40-14-2 record over the past three seasons and were often ranked in the top 10 of Mississippi’s high school teams. They just had nothing to show for it in terms of the postseason.

A blowout loss to Clinton early in the 2019-20 season offset a win over the Arrows later in the year, because of the goal differential tiebreaker. A similar scenario played out in 2020-21, with a 5-0 loss to Madison Central being the pivotal game.

This time, the injuries and 34-day layoff between games did them in.

“They deserve better. They’re one of the better group of players that have come through here in my 15 years. When they get out here and are playing well I have to ask, ‘Is this my team?’ Because it’s one of the best teams as far as skills and working the ball up the field,” Head said. “There’s no telling how good we could have been if we’d kept everybody healthy and we didn’t have this COVID thing.”

Head will try to replace seven talented, experienced seniors. After losing to Pearl, however, the thought of the rebuilding job ahead didn’t seem to bother him as much as what his current players missed out on.

“We were doing so good at the beginning of the year. We were playing with some of the best teams in the state. We were that good,” Head said. “And to end it like this, I hate it. I really think we had a shot.”