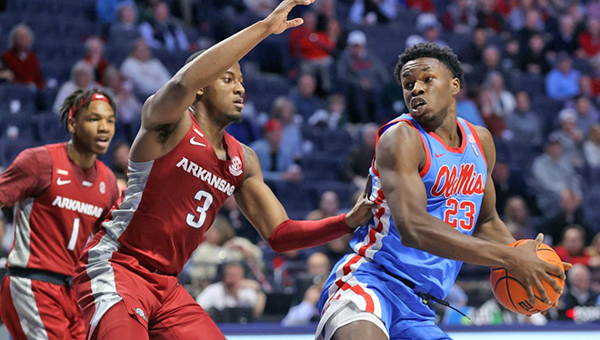 OXFORD — On Monday, Ole Miss snapped a losing streak with one of its better performances in an up-and-down season.

Two days later, it was once again on the down side and looking for answers.

“Give Arkansas credit,” Ole Miss coach Kermit Davis said. “They’re a physical team, they guard, they held us to 35 percent (shooting). I thought it was a real physical game on both ends and called the same, but their better players just made plays tonight. They went out, made some shots, and made some plays when they had to.”

Arkansas (15-5, 5-3 Southeastern Conference) has won eight of the last nine matchups against Ole Miss (10-10, 2-6). Of more immediate concern for the Rebels was a fifth loss in six games this season. The one win in that stretch was Monday against Florida, but Wednesday’s loss blunted the momentum they had gained.

Ole Miss will step out of conference Saturday to play a home game against Kansas State in the SEC/Big 12 Challenge.

“When you have an off night, it’s going to frustrate you, but you can’t let that keep you down,” said Ole Miss’ Matthew Murrell, who had a team-high 14 points and six rebounds. “We’ve got to get ready for the next game. We have a tough Kansas State team coming in on Saturday, so now we just have to be prepared for them.”

Notae, Williams and Trey Wade combined for all eight of Arkansas’ 3-pointers. Wade finished with 12 points and was 5-for-5 from the field, with two 3-pointers.

The game was tied twice in the early minutes with Ole Miss leading just once, 14-13. Arkansas closed the first half on a 12-6 surge for a 30-23 halftime advantage.

The Rebels stayed within single digits before a 13-0 run gave the Razorbacks their largest lead, 56-40, with 4:26 remaining. Williams scored seven points and Wade and Notae each made a 3 during the run.
Ole Miss missed its first seven 3-point attempts and only made 4 of 18 in the game. It was 19-for-55 (34.5 percent) overall.