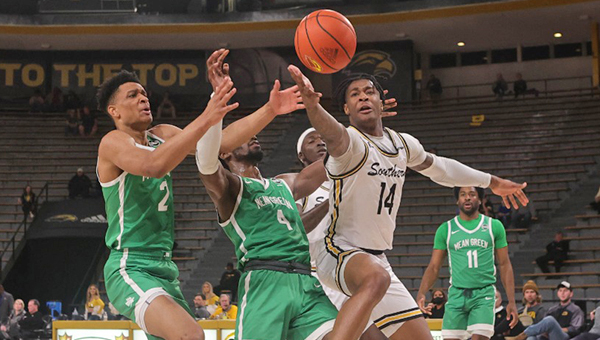 Southern Miss has not had a hard time competing this season. Finishing and winning have been a different matter.

Thirteen of the Golden Eagles’ 19 games have been decided by 10 points or less, and they’ve only won three of them. They’ve let second-half leads slip away in two of their last three conference.

Southern Miss lost 63-54 to North Texas on Thursday and will have a quick turnaround as Rice visits Reed Green Coliseum on Saturday.

Southern Miss (6-13, 1-5 Conference USA) led by five points early in the second half Thursday. It then made two field goals in a span of about 14 minutes, which allowed North Texas to take a 55-46 lead.

North Texas (14-4, 7-1) led for the last 17 minutes. Mardrez McBride finished with a game-high 21 points and made three 3-pointers in the second half.

In its last three C-USA games — losses to North Texas, Middle Tennessee and Louisiana Tech — the Golden Eagles have shot 33.3 percent in the second half. They’ve shot 48.1 percent in the first half.

“We’re leading them in the second half — same with La. Tech — but we’ve got to find a way to avoid these extended droughts on offense,” Southern Miss coach Jay Ladner said after the loss to North Texas.

North Texas’ 11 3-pointers marked the seventh game this season in which the Golden Eagles have allowed at least 10.

“I thought we did a great job taking care of the ball, but I thought the big telling stat was rebounding the ball,” Ladner said.