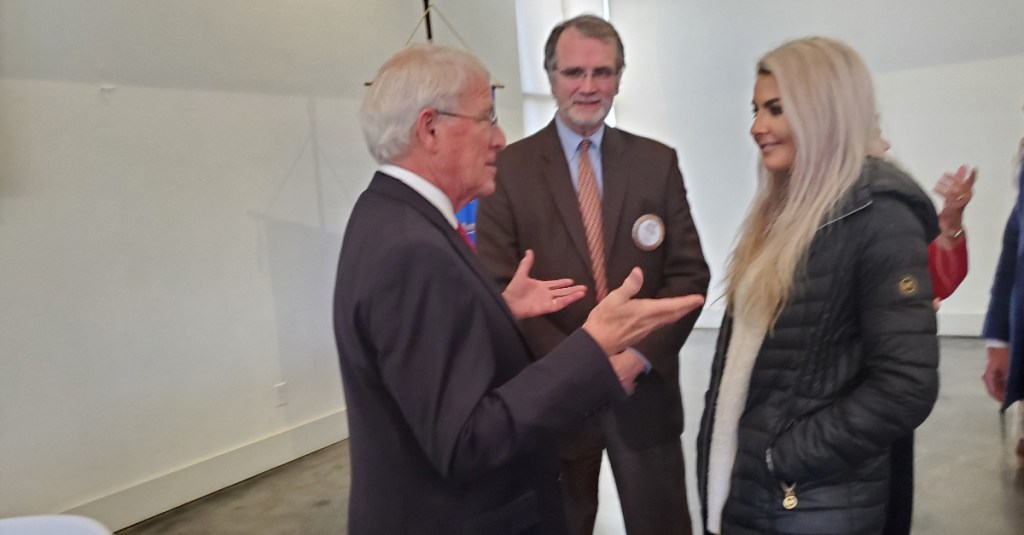 U.S. Sen. Roger Wicker, R-Miss., said he wants to see the Yazoo Backwater pumps project moving ahead — and he doesn’t want to have to wait for the White House to change residents to make it happen.

“I’m not willing to wait until we get another Republican president to try and get this approved,” Wicker told Vicksburg Rotarians Thursday. “I surely am hopeful that we can get it through.”

The U.S. Army Corps of Engineers in 2020 submitted a supplemental environmental impact statement proposing to install pumps in the Deer Creek area instead of at the Steele Bayou Control Structure, and that proposal received the blessing of the EPA.

The EPA ruled in December 2020 the proposed project was not subject to its 2008 Final Determination, which vetoed a similar project.

When the Biden administration took office, the EPA in November 2021 reversed its earlier decision, saying the project is in fact prohibited by EPA’s 2008 Clean Water Act Section 404(c) Final Determination.

“This is a promise made to the state of Mississippi decades and decades ago and it is being turned down on basically misinformation,” he said. “We’re not trying to drain some wetland that’s always been there. We’re trying to make it fair to drain a part of a man-made wetland because of what we put in and what was promised us.

“There’s a lot of misinformation from the Sierra Club and various environmental groups that is not true,” he added.

Wicker said after the meeting that Michael Regan, administrator of the EPA, said he wants to work with the pump’s proponents over the next 12 to 16 months to get a solution “and we’re going to hold him to that.

“I’m not sure everyone in the White House understands exactly what that project is,” he said. “The area that we want to drain is flooded because of a federal project. It’s not some wetland that has been out there for 50 years.

“We purposely built that to stop the Mississippi (River) from backing up into the Delta and when the bathtub effect comes as we always expected it to do, we pump it out. I think they think we’re trying to drain some natural swamp and that’s not true. I’m not giving up, although it’s been way, way too long.”

The pumps project was not the only topic Wicker discussed during the question and answer session.

“I guess people living outside Warren County don’t realize what an asset we have here.”

After the meeting, Wicker said the Vicksburg Municipal Airport received $159,000 in the first round of infrastructure funding and port officials are applying for a port infrastructure development grant “which we are optimistic about.

“Also, the Corps of Engineers is going to be able to do a lot more rehab on the levees because of the infrastructure bill, and then roads and bridges is a huge part and the Mississippi Department of Transportation is going to have a part in making those decisions,” he said.

The senator also discussed the problems in Ukraine, where Russian President Vladimir Putin is making overtures to invade the country.

He said Putin is nostalgic for the former Union of Soviet Socialist Republics.

“The Soviet Union broke up and those little countries like Kazakhstan, Belarus, Lithuania said, ‘We would like to be free and go our own way,’” he said, adding that when those countries became independent, “They looked westward and said we’d like to have free elections, we’d like to have a free market system like the western part of Europe, like the United States. We choose to be like them.

“That absolutely killed the soul of Vladimir Putin.”

Wicker said he supported President Joe Biden’s decision to send weapons to Ukraine and he was part of a seven-member delegation of four Democrats and three Republicans that went to Ukraine recently.

“We were unanimous; Putin should not do this,” he said.

Wicker also said he believes if Putin invades Ukraine, he will regret it.

“He’ll have a good week; the Russian troops will have a good day or two,” Wicker said. “Unless I miscalculate, the people of Ukraine (will never allow Russia to) conquer that country because the veterans there will not let it happen. They’ll fight from street to street, from house to house.

“My prayer is that they will be successful; it’s time he got a bloody nose for once. He’s a bully.”