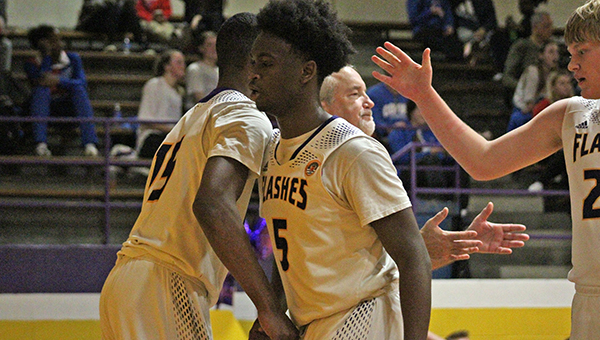 St. Aloysius' Lazaveon Sylvester (15) and Ahmad Stewart (5) celebrate after scoring a basket against Copiah Academy on Thursday. The Flashes will play Copiah again Tuesday at 5:30 p.m. in the first round of the MAIS District 3-5A tournament at Central Hinds Academy. (Ernest Bowker/The Vicksburg Post)

Mississippi’s high school basketball playoffs are fast approaching. The MAIS begins its district tournaments on Tuesday, and the MHSAA will play them next week.

Among all of the thrills and chills, triumph and heartbreak, will be a handful of oddball games no one truly wants to play but the rules dictate they must — the dreaded consolation game.

If second place is the first loser, then the loser of the consolation game is some level of loser that’s hard to calculate.

OK, it’s fourth place. Just go with me on this, please.

Third-place games have some purpose in the early stages of the playoffs. Either three or four teams advance out of the district tournaments, so the consolation games are used for seeding for the next round. Sometimes they serve as elimination games.

The deeper we go and the higher the level, though, the odder the vibe surrounding the whole thing.
In the 1960s the NFL played a third-place game, officially called The Playoff Bowl but often referred to as the Toilet Bowl by those who played in it, that pitted its playoff losers against each other.

The game was used as a fundraiser for the NFL’s player pension fund, and players received a small bonus that barely covered the expense of their trip. It was not popular with the players, and it was discontinued with the NFL-AFL merger in 1970. The Los Angeles Rams beat the Dallas Cowboys 31-0 in the final Playoff Bowl following the 1969 season.

The NCAA men’s basketball tournament was a big fan of third-place games. They had them in all of the regionals until 1975, and maintained a national third-place game until 1981. Virginia beat LSU 78-74 in the last one.

Closer to home, the MAIS famously has its Overall Tournament for basketball — the top three teams in each classification advance — which feels like a third-place game on steroids for most of the teams involved.

It’s an honor to play in the Overall Tournament, sure, but the teams that finish third in Class 1A or 2A — and even the champions in those classifications — usually don’t make more than a token appearance. Getting blown out by a Class 6A juggernaut doesn’t take away the trophy for the 1A champion, so what’s the point?

The MHSAA has dabbled with an Overall tournament several times. Vicksburg High won it in 1980, and the last attempt to get it going petered out in 2010.

The MAIS once attempted an Overall baseball tournament that only lasted a year or two in the mid-2000s.

Track and field has a new event called the “Mississippi Meet of Champions” that pits the top finishers from the MAIS and MHSAA state meets. It’s more of an all-star event than a true overall meet, though, and interest from competitors seems mixed.

That’s the real problem with third-place games and overall tournaments. Once the dream, no matter how far-fetched, of a championship is taken off the table — or realized — it’s hard to generate much enthusiasm for what is essentially an exhibition game.

You always play to win, and I’m sure the basketball teams playing consolation games over the next few weeks will give it their best effort. Some consolation games will even be necessary. I just don’t think many of the folks involved in them will be happy to be there.