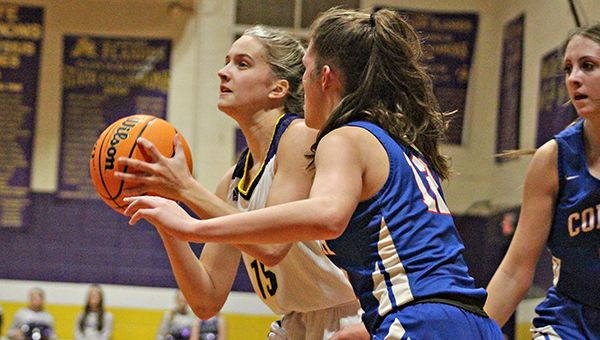 The high school basketball playoffs often bring with them the pressure of one-and-done scenarios that can spoil an otherwise great season.

They also offer the opportunity to wipe the slate clean and turn a bad season into a great one with a victory or two.
It’s not hard to figure out which side of that coin St. Aloysius’ teams are looking at.

The Flashes and Lady Flashes are both limping into the MAIS District 3-5A tournament at the end of difficult seasons. They can still salvage something, however, by winning when they take the court Tuesday at Central Hinds Academy in Raymond.

“It would be amazing. It would be a dream,” Lady Flashes coach Savannah Buck said with a smile. “And I told them it’s not a far reach. It’s there. We just have to work. If we do that it would be a Cinderella story at that point — and that’s what we’re looking for.”

Buck’s team will face Madison-St. Joseph at 4 p.m. Tuesday in the very first game of the district tournament. The Lady Flashes have only won three times this season, but an upset of their Catholic school rival would do more than provide a pleasant memory to finish on.

The top four finishers in the district tournament advance to the Class 5A South State tournament. With six teams in the district, Tuesday’s games will be elimination games and the survivors are guaranteed to move on.

The Lady Flashes were winless in the regular season in district play, but Buck said she has seen improvement in the past month. One good game is all it takes, and she’s hoping they have it in them.

St. Al lost 58-23 to Copiah Academy in its regular-season finale on Thursday.

“We’re just going to go full force. That’s what we’ve been doing the past couple of games, is going at it head on,” Buck said. “Stay positive, stay focused the entire time. I feel like that’s what we’ve got to do.”

St. Al’s boys’ team, meanwhile, will face Copiah Academy on Tuesday at 5:30 p.m.. The Flashes lost their last five regular-season games, which coach Anthony Lumpkin admitted has sapped some of the team’s confidence.

St. Al finished the regular season with a 76-62 loss to Copiah Academy on Thursday.

“That’s hurt. We’re just trying to find ourselves again at the end of the season,” Lumpkin said. “But we’re looking at it as this is the second part of the season. We’re 0-0 right now. We’re trying to stay positive going into the tournament. I think we can win that first game.”

Winning the first game, Lumpkin added, is all it’ll take to make this a successful season.

St. Al lost in the first round of the district tournament in 2020. The tournament was canceled in 2021 and the Flashes were not among the top four teams in the regular-season standings that advanced.

Getting past this round in his first season — and with most of the roster set to return next year — would then be a major milestone, Lumpkin said.

“It means a lot, because I think it was a few years ago the last time they advanced,” Lumpkin said. “For me to come in and have us advance to South State would be a big deal — not only for me, but for this program. It’s saying we’re heading in the right direction and that’s what we’ve been talking about since day one.”